It was snowing Thursday in downtown Los Angeles, as Disney kicked off its 40-city "Train Tour” to promote its Nov. 6 performance capture-based release “A Christmas Carol” in 3D. 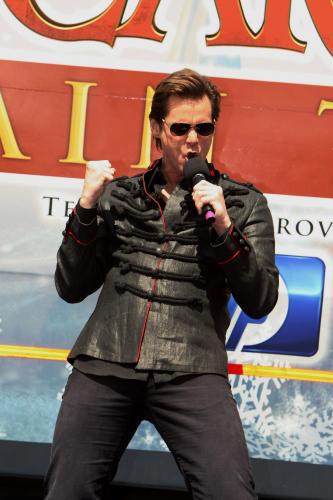 Director Robert Zemeckis, Jim Carrey (who plays Ebeneezer Scrooge and the three ghosts) and Disney chairman Dick Cook were on hand to launch the tour, which begins tomorrow at Los Angeles’ Union Station and concludes at New York’s Grand Central Station the weekend of Oct. 30.

HP is the title and technology sponsor, and Amtrak is the transportation partner.

Outside the four-car train with the film’s logo on the side, snow fell on guests as carolers sang classics to create Christmas in May.

On track 13, Cook opened the first event of the holiday season, joking that there are "218 shopping days left." And Zemeckis said the tour "showcased storytelling in its most classic form and most modern."

But Carrey stole the show, moving in and out of his Scrooge character to the crowd’s delight. The actor said he wanted to capture "the bitterness of a life without love."

On 3D momentum, Disney’s “Up” opens May 29 on an estimated 2,000 3D-ready digital cinema screens in 1,500 theaters in North America, but Cook is hopeful that the rollout will pick up speed during the coming months.

“There will be significantly more 3D-ready screens around the world for ‘A Christmas Carol,’ ” Cook predicted. “With the quantity of 3D movies coming out — as well as the quality — we have almost reached a tipping point. Right now it is difficult to launch more than one 3D movie at a time. But we are coming to a point where there will be multiple 3D movies out at the same time.”

In order to preview the film at each stop, Disney will erect an inflatable digital 3D theater featuring clips from the film.

Specially designed for the tour, the 50-by-50-foot theater stands 25 feet high, seats 125 and is equipped with Dolby’s 3D system, digital cinema servers and sound, as well as Barco digital projection.

The tour inside the train includes artifacts on loan from the Charles Dickens Museum of London; artwork and costumes from the film; and a chance to morph into one of the film’s characters using HP TouchSmart PCs. It also includes demonstrations of performance capture.

“It’s about the acting, that is all that we concentrate on,” Zemeckis said of the performance capture process. “Actors do their scenes from beginning to end. It’s like theater.”

Said Carrey: “There are parts, production-wise, that are much easier with performance capture. For an actor, there are other challenges. We have no reference points. You are on a stage, and there are grids. We pretty much have to create the mood in our head, which is a little bit more difficult than a regular film where you are helped by the scenery and the costumes.”

As part of the Thursday launch, Disney presented a $100,000 donation to the Boys & Girls Club, whose kids are participating in the tour.