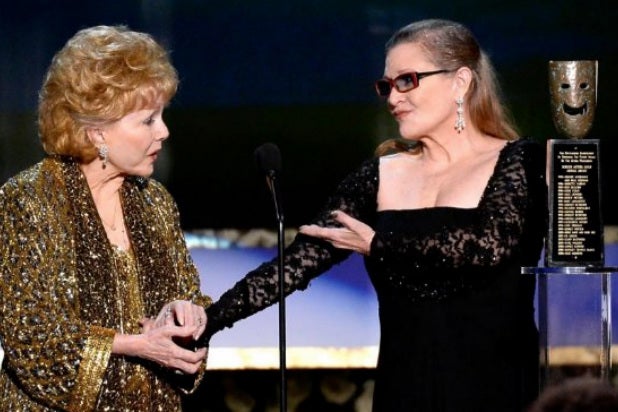 The tears flowed early on as Hollywood luminaries gathered at Forest Lawn Memorial Park in Burbank to remember the late Carrie Fisher and Debbie Reynolds, the mother-and-daughter showbiz icons who died on consecutive days in December.

Reynolds’ son Todd Fisher opened the memorial with a color guard to honor his mother’s work for the troops — then got down to defining the event, which he didn’t want to describe as a memorial, to honor Reynolds’ personality.

“This entire thing I’m calling a show, not a memorial,” Fisher said. “Because my mother didn’t like funerals or memorials. She liked shows and parties.”

“This show was really designed for you to be in our living room,” he added. “We’re going to focus on the family aspects of this and the personal. So you’re going to see a lot of things you’ve never seen before.”

Fisher said he plans to put his sister’s writing room and his mother’s living room on display, for all their fans to enjoy the places where their respective magic actually happened. And although Carrie Fisher took on her iconic role as Princess Leia in “Star Wars” when she was in her late teens, her brother said he had thought of her in that regard before.

“She was always my princess,” Fisher said.

He also shared some intimate details about Reynolds’ thoughts about mortality, and how she asked him for “permission” to be with her daughter when she died.

“My mother said to me many times, ‘I never want to go to my daughter’s funeral,'” Fisher said, describing her passing one day after his sister’s as a “beautiful exit.”

Todd Fisher then made way for a Carrie Fisher video montage that captured her both in her most famous roles and in candid, home video moments, concluding with her final appearance in “Star Wars: The Force Awakens.”

“Star Wars” droid R2D2 then took the stage and rolled over to Carrie Fisher‘s empty director’s chair before another short video played.

That was followed by a Reynolds montage that opened with some of her most memorable song-and-dance performances. It then transitioned into her work for veterans and for mental illness, as she was a longtime president of The Thalians, a charity founded by Hollywood stars dedicated to mental health.

“She sort of started what this town was going to need quite a bit of, which was treatment for the mentally ill,” Carrie Fisher said in the montage.

“That will earn her a beautiful spot in eternity,” Reynolds’ longtime partner-in-charity, Ruta Lee, said in a speech after the video.

Lee followed her remarks with a performance, asking — and receiving — a standing ovation from the crowd at its conclusion, in honor of Reynolds and Fisher.

Four young students from Reynolds’ dance school then took the stage — introduced by Reynolds via a video shot a few months back — and performed to the Brian Setzer Orchestra’s “Dirty Boogie.” They were followed by a tap-dancing duo, and then a tribute to her breakout role, “Singin’ in the Rain,” which even incorporated hip-hop elements.

“I think Debbie would have liked that,” Todd Fisher said.

Turner Classic Movies host Ben Mankiewicz took the stage after that, representing what Todd Fisher said was his, his sister’s and his mother’s favorite channel.

“She clearly had one of the great b– meters in all of Hollywood,” Mankiewicz. She had what so many of us spend $300 a session three days a week to get. She had a sense of self.”

The Gay Men’s Chorus of Los Angeles was up next, performing a set that began with “True Colors,” a song from the movie “Trolls” by Justin Timberlake and Anna Kendrick.

Dan Aykroyd, who was briefly engaged to Carrie Fisher, stepped to the microphone after that, sharing a story about once saving Carrie Fisher‘s life by using the Heimlich maneuver to free an errant Brussels sprout and regretting not being there for her in December.

He was followed by another video montage of Carrie Fisher with James Blunt’s “You’re Beautiful” providing the soundtrack. As Todd Fisher said, Blunt wrote that song on the piano in Carrie Fisher’s bathroom.

Some old friends of Carrie Fisher’s took the stage next to share personal — very personal — stories about what the Hollywood star was really like.

“The first time I had sex was at Carrie’s house,” Fisher’s friend Gavin de Becker, an author and security specialist, told the crowd. “It wasn’t with Carrie, but she arranged it.”

De Becker gave a fairly lengthy eulogy that shed light on Fisher’s personal humor and generosity, including anecdotes like a failed attempt to steal bathrobes from a luxury hotel in Paris.

“By knowing you, Carrie Fisher, we all hit the jackpot,” de Becker said.

After another interlude from Todd Fisher, his wife introduced a video of Carrie Fisher singing with daughter Billie Lourd, before a montage of Fisher backed by a new song from Blunt, which had been teased before the memorial — and which had plenty of fans claiming to be bawling their eyes out on social media.

The show concluded with an uptempo musical number with hip-hop moves, closing the proceedings on a fun note.