That Carrie Fisher — she’s such a pill. Even in death.

“Star Wars” actress Fisher was buried along with her mother Debbie Reynolds on Friday after dying at age 60 in late December. And she has been ushered to the Great Beyond in an urn shaped like a giant Prozac pill.

As fans continued to mourn her passing, they couldn’t help but get a kick out of the container. 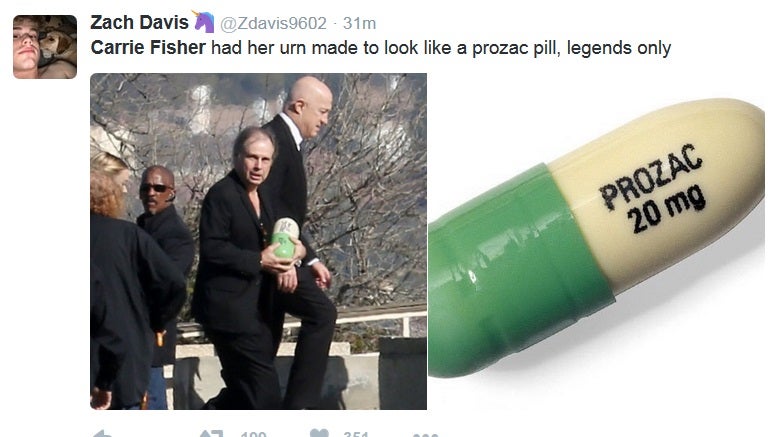 Carrie Fisher's urn is a giant Prozac pill and that has to be the most iconic thing this millennium. ????????

“Carrie Fisher’s urn is a giant Prozac pill and that has to be the most iconic thing this millennium,” enthused another admirer.

“God I want to be 1/10 as funny as Carrie Fisher was,” another reply offered.

The actress’s brother, Todd Fisher, explained the odd choice of urn to ET Online on Friday, saying it was his sister’s “favorite possession.”

“Carrie’s favorite possession was a giant Prozac pill that she brought [sic] many years ago. A big pill,” Fisher said. “She loved it, and it was in her house, and Billie and I felt it was where she’d want to be.”

“We couldn’t find anything appropriate. Carrie would like that,” he continued. “It was her favorite thing, and so that’s how you do it. And so they’re together, and they will be together here and in heaven, and we’re OK with that.”

Fisher died Dec. 27, days after suffering a heart attack while on a flight from London to Los Angeles. Her mother, Debbie Reynolds, died a day later at age 84.