Two foreign films, set against a backdrop of war and political turmoil, deal with the attempt to carry on a private life in the face of larger issues. Both are artfully executed, but slow-paced with a focus on the inner workings of a pensive protagonist of few words. 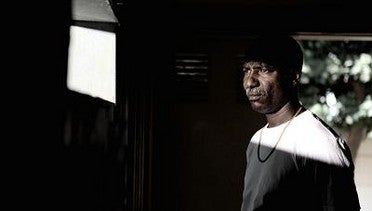 In Mahamat-Saleh Haroun’s “The Invisible Eye,” actress Julieta Zylberg draws a rich characterization of a young Buenos Aires schoolmistress who tries at once to be authoritarian in the classroom and to succumb to her awakening sexual desires. Her angst is clear in her face and eyes, just as the professional troubles of a 55-year-old pool attendant at a N’Djamena hotel, mingled with pressure to support the war effort, render him prone to long bouts of contemplation in Diego Lerman’s “A Screaming Man” (Un Homme Qui Crie).
First, “Invisible Eye.”
It’s March 1982 at the Colegio National, a Buenos Aires prep school for the country’s elite and next generation of leaders. The school supervisor, Carlos Biasutto (Omar Nunez), reminds the students that their school’s history is closely linked to that of their country – Argentina – and a source of great national pride. Biasutto promotes discipline linked to constant surveillance as the key to keeping the students on the right path to becoming good citizens of the nation, to innocent new hire, 23-year-old Maria Teresa Cornego (Julieta Zylberberg).
Thus, the school becomes a metaphor for the Dirty War period (1976-1983), a seven-year campaign of the “National Reorganization Process” against suspected dissidents and subversives, who in turn became known as “The Disappeared.”
Oppression runs thick at the Colegio National. The school day is marked by a series of exercises in lining up, roll call and conformity. The teens, robbed of any trace of individuality, are clad in blue blouses and ties — gray jumpers for the girls and slacks for the boys. To be singled out, is to be in conflict with authority.
Maria Teresa is eager to please her boss. After her grandmother tells her she started smoking on the sly as a teen, she embarks on a campaign to catch students smoking. She peers under bathroom stalls, visits the boy’s locker room during swim practice and takes to lurking in the Turkish toilet cabinets, lying in wait to catch a student in an unsanctioned act. Her surveillance activities consume her, awakening a repressed sexuality that ultimately overwhelms and confuses her.
“Screaming Man” takes place in the throes of Civil War. Adam (Youssouf Djaoro), a former national swimming champ from 1965, lives a peaceful life as a pool attendant at a nice hotel in present-day Chad. He is grooming his 20-year-old son Abdel (Diouc Koma) in the job when his pleasant routine is interrupted by new Chinese owners who move him to a gatekeeper position, leaving his still rough-around-the-edges son to care for the pool and give swimming lessons.
Though Adam explains that “the pool is my life,” he is removed from it. Outside Adam’s private humiliation and upset, a civil war rages and rebel forces are attacking the government. Adam is hounded for a financial contribution to the war effort by the District Chief, or a recruit to join the fight.
Adam can’t speak of his troubles at work to his wife (Hadje Fatime Ngoua), who spends an entire family dinner trying to get him to utter one word. Father and son ultimately keep the secret of Adam’s transfer from her. But when Adam’s son Abdel is drafted, he can no longer keep the outside world from penetrating the security of his idyllic existence at the hotel – even though in Abdel’s absence he is reinstated at his beloved pool.  Long shots of Adam thinking express the inner conflict of an individual struggling to process his personnel feelings in the face of a much larger cause. “A Screaming Man” actually ends with a quotation that begins, “Beware of being a spectator.”
Just as toward the end of the film Adam’s neighbors run through the streets in a terrified mass exodus of the African city, out the window of Maria Teresa’s sanctuary, the fortress-like South American school where she works, citizens are seen dashing to the center of an eruption of civil unrest.