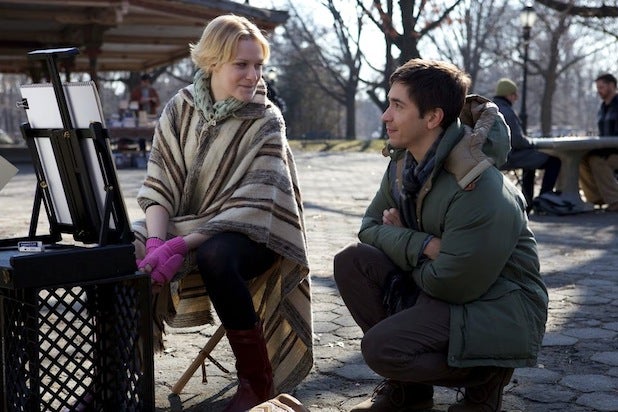 Oddly named for a Joni Mitchell song, the pleasant but slight rom-com “A Case of You” celebrates, and far too gently lampoons, Brooklynites in thrift-store threads who use the word “dope” as an adjective even though they’ve been out of college for years.

And as we know from the current small avalanche of starter novels and starter indie films, Brooklyn is the hub of America’s creative universe, or at least its attractively blocked young scribes.

Nevertheless, we are invited to pity poor Sam, who is afflicted with two of the beginning screenwriter’s reliable little helpers. His every effort to write serious fiction produces only a string of limp clichés. And a buried skeleton in the family closet has left him with intimacy issues so crippling that he can mutter “I love you, too” to his over-caffeinated publisher (a very funny Vince Vaughn), but not to his coffee-shop crush, a friendly, bright, comely barista named Birdie Hazel.

Not even when she’s played by Evan Rachel Wood, a grand talent woefully miscast as a flawlessly nice person whose kooky fedora, striped blazer and up-for-anything good cheer bespeak a free spirit who threatens to do awkward, cautious, ambivalent Sam a world of good.

Enter high concept. Unable to approach her directly, Sam bones up (as it were) on Birdie’s Facebook profile and tries to reinvent himself as her mirror image — a Darwin-reading, judo-rolling outdoorsman with a yen for ballroom dancing on the side. This gambit clearly won’t fly because, in short, social media boo, be real hooray.

Though smoothly directed by Kat Coiro (“Life Happens,” “While We Were Here”), “A Case of You” is short on original insight. On the plus side, Wood’s exhausting perkiness is redeemed — just — by lively support from Peter Dinklage as Birdie’s flamboyantly gay replacement at the coffee-machine, Sam Rockwell in electrocuted hair as a stoked guitar teacher, and Brendan Fraser as Birdie’s ex-boyfriend, a shaggy hopeful in New York’s small-performance-space scene.

“A Case of You,” which goes on-demand Nov. 1 and opens in theaters Nov. 6, is mumblecore for the modestly hip, and if you’re looking for a less trendy take on the lost-in-space youth of today, I’d go with Andrew Bujalski’s wonderful “Computer Chess”, or Aaron Katz.’s lovely “Cold Weather,” which is set far from Brooklyn in the Pacific Northwest.