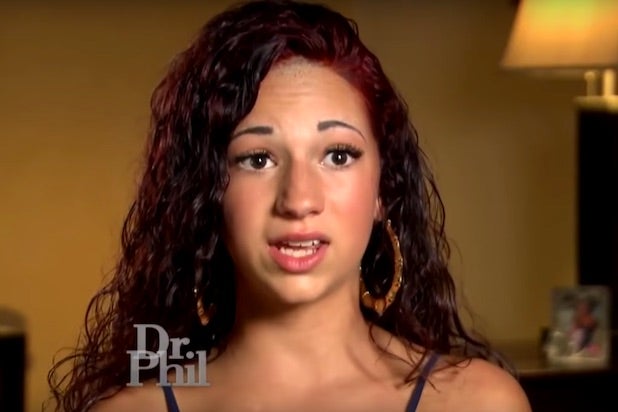 The infamous “Cash Me Outside” girl, Danielle Bregoli, returned to “Dr. Phil” on Friday after spending four months at a treatment facility, and told Dr. Phil that he was “nothing” before her appearance on the show in September.

“I made you just how Oprah made you,” she told him when he asked her if the attention has been good for her. “You were nothing before I came on the show.”

“Thank you for that,” Dr. Phil responded.

Also Read: 'Cash Me Outside' Girl to Return to 'Dr Phil' Following Treatment

Bregoli spent four-and-a-half months at the Turn-About Ranch in Utah after after appearing on “Dr. Phil” in September. She spoke in a strange accent that she apparently picked up from “the streets,” and proceeded to call the audience “hos.” Dr. Phil took the audience’s side, and they applauded, and Danielle threatened to beat them all up, outdoors.

Also Read: Coen Brothers to Bring Back 'Scarface' in 2018

On Friday, Bregoli entered the studio that was cleared of an audience before the show began taping because Dr. Phil feared “the temptation to perform or play a role would be too great.”

Also Read: Dwayne Johnson on Pro-Trump Under Armour CEO: 'His Words Were Divisive'

“Where is everybody? There’s no hos!” she said. Dr. Phil then proceeded to ask her whether she was glad she went to the ranch and whether it will help her in the long term.

The show featured some clips from Bregoli’s time at the ranch, where was “was respectful” and her “attitude and accent” disappeared. She was loving towards her horse and the staff at the ranch. However, does she feel like the ranch changed her?

“That was just a show, that was just so I could get out of there,” she told producers behind stage. “You could put me on the same program for six years and I would come out the same.”

She added that her second time on the show would have her “throwing hands at somebody.”

Indeed, Bregoli’s mom, Barbara Ann, told Dr. Phil that “the minute we left the ranch, she started to test me.”

Barbara Ann was also a guest on the show, who agreed that both she and her daughter are explosive and combative. She took the time on Friday’s show to let me people know she felt unfairly criticized for being a bad mom after the show’s headline back in September was “I Want to Give Up My Car-Stealing, Knife-Wielding, Twerking 13-Year-Old Daughter Who Tried to Frame Me For a Crime.”

“I was shocked you came to us but then you seemed to be making demands to us,” Dr. Phil told her, reminding her that one of her demands was, “I will not come on the show if you contact Danielle’s dad.”

A staff member from the show came on  stage to tell viewers that no guest had ever made demands to come on the show but instead were always grateful for the help Dr. Phil offered.

“Has any show ever had the highest ratings like my daughter’s did?” Barbara Ann retaliated.

At the end of the segment, Bregoli refused to admit that Dr. Phil helped her.

“It was his money, it wasn’t him!” Bregoli shouted. “I could’ve paid for it myself.”

“You have to say thank you to Dr. Phil,” her mother responded. “Because he did it.”

Bregoli ended up thanking Dr. Phil for his help… but whether it was sincere is left in the eye of the beholder.