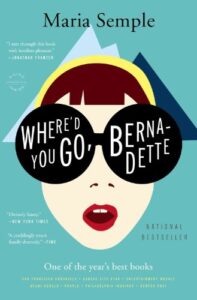 Two-time Oscar winner Cate Blanchett is in advanced negotiations to star in Richard Linklater’s adaptation of “Where’d You Go, Bernadatte,” TheWrap has learned.

The project is set up at Annapurna Pictures, whose Megan Ellison will produce with Nina Jacobson and Brad Simpson of Color Force.

“Bernadette” follows an agoraphobic architect who disappears right before a family trip to Antarctica. Her teenage daughter narrates the story, which unfolds via emails, letters, FBI documents and correspondence with a psychiatrist.

Blanchett, who won Oscars for Martin Scorsese’s “The Aviator” and Woody Allen’s “Blue Jasmine,” is gearing up for another hectic awards season thanks to her acclaimed performances in James Vanderbilt’s journalism drama “Truth” and Todd Haynes’ lesbian romance “Carol.”

Blanchett also stars in a pair of upcoming Terrence Malick movies, and she’s poised to play Lucille Ball in an upcoming movie that Aaron Sorkin is writing for Escape Artists. She’s represented by CAA and RGM Artists.