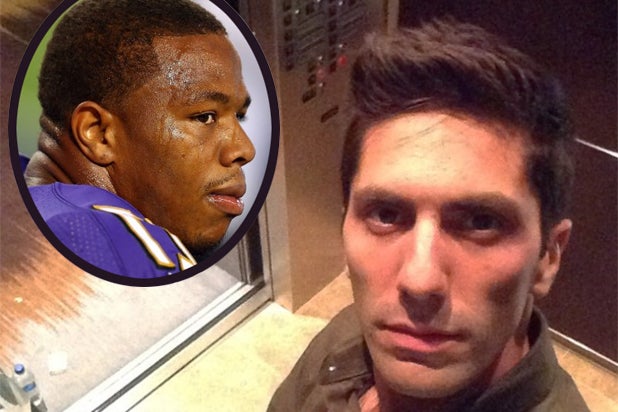 Coincidentally, the MTV host confessed to punching a woman in his recently released autobiography. Though Schulman insists the incident was self defense and that he would never make light of domestic abuse.

“In college, I was in a situation where I was forced to defend myself, after being suddenly attacked,” Schulman told TheWrap. “Charges were brought, but my case was almost immediately dismissed as this was clearly a case of self-defense. My post was meant to raise awareness and support for everyone affected by the awful abuses of domestic violence.”

The post referenced by Schulman included an elevator selfie with a caption, “Cowards make me sick.Real men show strength through patience & honor. This elevator is abuse free.”

Schulman posted the picture just hours after TMZ released a graphic video of Rice assaulting Janay Palmer in an elevator, prompting some backlash against the TV star who thought he was making light of Rice’s violent outburst.

“The joke was fucked up for many reasons not in the least of which is that Nev himself has a history of violence against women,” writes Gawker’s Jordan Sargent.

Others argued Schulman was simply misguided:

This Nev Schulman elevator selfie is such a perfect stand in for male dudes asserting themselves into narratives they don’t belong in.

Social media was quickly abuzz after bloggers and internet sleuths found a passage in Schulman’s autobiography, in which the author admitted to being expelled from Sarah Lawrence College after accidentally punching a woman. Schulman was arrested for the incident, but said the charges were quickly dropped.

Schulman rose to prominence as the subject of the controversial feature documentary “Catfish” in 2010. Directed by Henry Joost and Ariel Schulman, the film follows Nev Schulman’s burgeoning relationship with a woman he met online, who winds up being someone else entirely.

The movie was adapted into “Catfish: The TV Show” by MTV in 2012. Nev Schulman hosts the docuseries, which also sets out to expose lies inherent to online dating.

Rice, the running back who helped the Baltimore Ravens win Super Bowl XLVII, was originally handed a two-game suspension by the NFL in July for the domestic violence incident, which left his then-fiancee unconscious on the floor of an Atlantic City casino.

TMZ released a longer and more disturbing video of the altercation Monday, which prompted the Ravens to cut him and the league to suspend him indefinitely. Janay Rice (formerly Palmer), the victim of Rice’s brutal attacks who has since married him, once again jumped to his defense Tuesday.