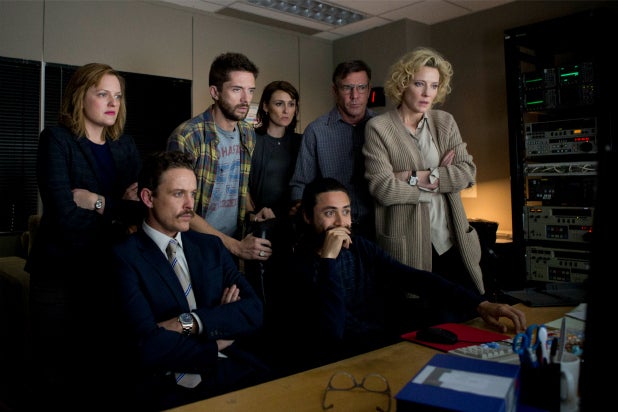 CBS is refusing to run advertising for the Dan Rather biopic “Truth” starring Robert Redford and Cate Blanchett, the network has confirmed to TheWrap.

According to The Washington Post, “CBS has denounced the movie, which opens Friday, as a disservice to the public and journalists.”

In the film, Redford plays Rather opposite Blanchett as producer Mary Mapes, portraying the true story of a CBS “60 Minutes” investigation into former President Bush’s military service. The documents on which the story was based were later deemed forgeries, discrediting the report and forever tarnishing Rather and Mapes’ careers.

The Post reports that Sony Pictures Classics wanted to promote the film on “The Late Show With Stephen Colbert,” the “CBS Evening News,” “CBS This Morning” and “60 Minutes,” but was turned down. Instead, the studio is now advertising on ABC, NBC, Fox and other cable networks.

“It’s astounding how little truth there is in ‘Truth,'” Gil Schwartz, longtime chief spokesman for CBS Corporation, told the Post. “There are, in fact, too many distortions, evasions and baseless conspiracy theories to enumerate them all. The film tries to turn gross errors of journalism and judgment into acts of heroism and martyrdom.

Also Read: 9 Whistleblowers Who Changed the Course of History

“That’s a disservice not just to the public but to journalists across the world who go out every day and do everything within their power, sometimes at great risk to themselves, to get the story right,” he said.

Brad Fischer and William Sherak, two of the producers of the film, were surprised at CBS’ reaction.

“It is ironic that a media company that owns a major news division would go to such great lengths try to keep people from seeing a film about journalists and the impact of media consolidation,” they told TheWrap.

“Truth” opens in theaters this Friday.