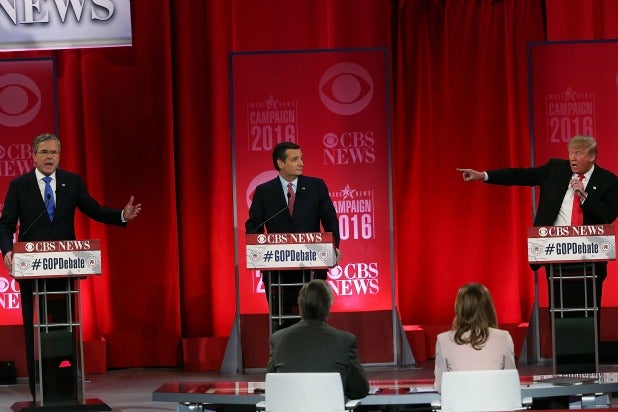 “The World Trade Center came down during the reign of Bush,” Donald Trump said, as the tension quickly built in South Carolina.

CBS’s GOP presidential debate started with a moment of silence and turned into the most heated GOP battle yet. Shot were fired, from Donald Trump attacking Jeb Bush’s family to Marco Rubio accusing Ted Cruz of not speaking Spanish.

“Face the Nation” anchor John Dickerson moderated, although it was hard for him to keep control of the fired-up candidates. Here are five of our favorite moments.

Also Read: The 2016 Election Just Got a Lot More Important

Bush fired back: “I’m sick and tired of him going after my family.”

“I thank God it was George W. Bush in the White House on 9/11 and not Al Gore,” Marco Rubio said, defending his usual nemesis, Jeb Bush.

“While Donald Trump was building a reality TV show, my brother was building a security apparatus to keep us safe, and I am proud of what he did,” Bush eventually said.

4. Trump to Cruz: ‘You’re the biggest liar. Worse than Bush’

Cruz accused Trump of being too liberal, with a record of supporting abortion.

Ummmm, did Trump just kind of, sort of, compliment Bush?

“This guy will say anything, nasty guy, nasty guy,” Trump said of Cruz. “Now I know why he doesn’t have one endorsement from any of his colleagues.”

We think that Trump may actually prefer Bush over Cruz at this point.

“Trump has this weird pattern — when you point to his own record, he screams liar,” Cruz responded.

3. Did Cruz make a Reagan-related error?

Ted Cruz appeared to botch his facts when he said that there hasn’t been a Supreme Court justice confirmed under a “lame duck” president in 80 years. Dickerson quickly noted that Justice Anthony Kennedy was confirmed in 1988, during the last year of Ronald Reagan’s administration. The two spoke over each other until the crowd started booing.

It seems Cruz and Dickerson got tied up over the terms “appointed” and “confirmed.” The back and forth went on for about 30 seconds, but it seemed like an hour. Political pundits will be talking about this, and fact checking, on all of the post-debate coverage through Sunday’s public-affairs programs.

2. So, Cruz does speak Spanish…

Cruz called out Rubio for a comment he made on Univision. Rubio responded with a classic line: “I don’t know how he knows what I said on Univision because he doesn’t speak Spanish.”

Translation: “If you want say it now! Right now say it in Spanish if you like.”

The debate started off with a tribute and moment of silence for Supreme Court Justice Antonin Scalia, who died at age 79. Everyone on the stage got a chance to discuss President Barack Obama’s plan to name a new justice.

Read more on how Scalia dominated the early stages of the debate here.