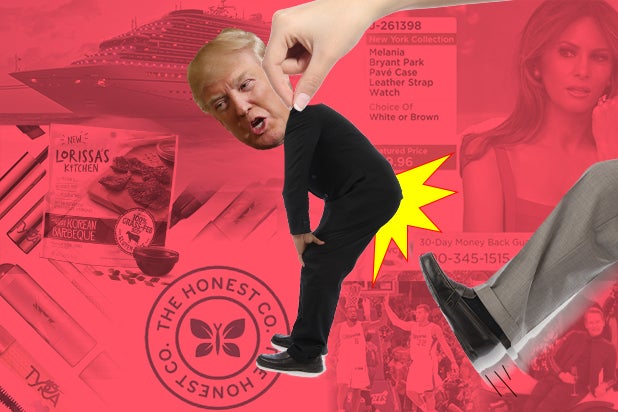 NBC’s reboot of “Celebrity Apprentice,“ with new host Arnold Schwarzenegger, wasn’t exactly a ratings killer. But as the network decides whether to renew the show, it faces another problem: Half its sponsors from last season have bailed out after boycott threats.

A campaign called #GrabYourWallet, which called on sponsors to abandon the show because of President Donald Trump’s involvement with it, said six of the show’s 12 corporate backers from last season have agreed not to return. None of the companies explicitly cited Trump as their reason, but campaign organizer Shannon Coulter says the gold-plated writing is on the wall.

“I think it’s pretty clear at this point that the Trump brand name is toxic,” she told TheWrap.

TheWrap confirmed with five of the six sponsors Coulter identified that they were indeed parting ways with the show. The sixth, Jessica Alba’s The Honest Company, did not respond to repeated requests for comment. But the #GrabYourWallet campaign provided an email from The Honest Company saying it was only in one episode in the latest season and won’t be in the next one, if it happens.

Although Trump no longer hosts “Celebrity Apprentice,” he continues to hold the title of executive producer. His spokeswoman, Hope Hicks, confirmed last year that Trump has also maintained a financial interest in the franchise.

#GrabYourWallet called on consumers to boycott sponsors of the show if they didn’t abandon it. So far, Tyra Beauty, Lorissa’s Kitchen, the Los Angeles Clippers, QVC and Carnival Corporation have announced that they will sit out the show’s next season.

NBC famously severed its ties with Trump soon after the reality-show host launched his incendiary presidential campaign. But in December, Variety reported that Trump would retain credit as executive producer of the revived reality series, almost two weeks after the sponsorships for the show were announced.

Several companies have said they were blindsided by Trump’s involvement in the reboot, according to Coulter.

A rep for Lorrisa’s Kitchen told TheWrap of the sense of being blindsided, “Yes, that was our experience as well.”

The status of another sponsor, Motor giant Kawasaki USA, is in question. A rep for the company told Reuters last month: “Once we understood the concerns of American citizens, we have taken the approach of agreeing not to participate in the show in the future as long as Mr. Trump is involved as an executive producer.”

But the company later said the rep’s comments were “a misrepresentation of the company’s position.”

Kawasaki said the employee was no longer working there, but the company has not publicly reversed its decision to exit the show. Repeated called and emails to the company went unanswered.

NBC declined to comment. Reps for MGM — which produced the show and handed the sponsorship deals — did not respond to TheWrap’s request for an interview.

Coulter says all she requires to get off the boycott list is a public commitment to sit out the show’s next season. She doesn’t ask that companies denounce Trump on their way out the door.

Sponsors who have agreed to pull out were careful not to draw a direct connection between their decision not to sponsor the show and the boycott, only promising not to renew their deal next year.

At least one company, Carnival Corporation, described its experience with the show as “extremely positive.”

“We have no current plans to be a sponsor of the program next year since we have begun to produce our own TV programs about cruising and tourism for the networks,” the company told TheWrap in a statement. A company rep told us over the phone that Carnival would be open to sponsoring other future seasons.

Also Read: #BoycottUber: Why Uber Is Twitter's Boycott of the Day

Coulter, a 45-year-old digital marketing specialist from San Francisco, started the #GrabYourWallet campaign five months ago. Rather than targeting Trump, her boycott zeros in on his business partners. Using social media, Coulter encourages buyers to stay away from companies that carry Trump merchandise or sponsor Trump-related products and events.

According to analytics Coulter shared with Mashable, the #GrabYourWallet hashtag has been tweeted more than 213,000 times and garnered more than 600 million impressions. Many of her followers also contacted the stores on Coulter’s boycott list, including Macy’s and Amazon.

The boycott claimed what it said was its biggest success when retail giant Nordstrom dropped Ivanka Trump’s clothing line earlier this month — though Nordstrom denied the decision had anything to do with #GrabYourWallet. A February Wall Street Journal report showed sales of Ivanka’s fashion line had plummeted by nearly a third in the last fiscal year.

The campaign has already gotten support from some big-name activists and stars, including Gloria Steinem, Lucy Lawless and Chelsea Handler, who posted a picture of herself in front of the White House holding Nordstrom bags soon after the company dropped Ivanka’s line.

“At the end of the day brands try to avoid unnecessary controversy,” founder and president of the Los Angeles-based Brand Identity Center, Chad Kawalec, told TheWrap. “The Trump brand is highly controversial to at least half the country. That, coupled with rather poor ratings, gives sponsors permission to pull out.”

The backlash forced some companies on #GrabYourWallet’s boycott list to play down their relationship with the show. Tyra Banks’s Tyra Beauty was on the list because Banks appeared as an advisor on show and promoted her makeup and skincare brand.

“We want to make it clear that Tyra Beauty is not an active sponsor of ‘The Celebrity Apprentice’ series and does not plan to become one in the future,” a Tyra Beauty spokesperson later clarified in a statement. “Filmed a year ago, our involvement was limited to showcasing Tyra Beauty’s innovative cosmetics products.”

Five companies have yet to drop the NBC reality show: King’s Hawaiian, Trident, Welch’s, See’s Candies and Universal Studios Hollywood. None responded to TheWrap’s request for comment, except for See’s, which declined to comment.

“I would be very surprised if another season of ‘Celebrity Apprentice’ was announced,” she said.

A Jew and a Gay went to pick a Muslim up from the airport, headed straight to Nordstrom, and then headed over to @whitehouse to give our thanks! @POTUS! @quinnmurphy