It had to happen — celebrities have found a way to make money by tweeting.

Kim Kardashian, Joel McHale, Dr. Drew, Nicole Richie and husband Joel Madden and Audrina Patridge from "The Hills" are just a few of the names who have endorsement deals for their Twitter accounts. 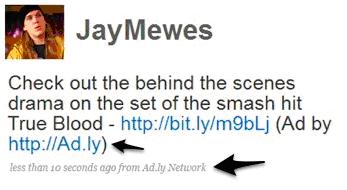 The celebs are signing onto a new viral marketing strategy set up by the Los Angeles-based ad agency Ad.ly, which brokers relationships with the advertisers.

Currently, Ad.ly has lined up international companies such as Sony Pictures, NBC, Universal, Microsoft and Nestle for the new platform.

Though celebrities are the most prominent users, any one of Twitter’s more than 50 million users can sign up by filling out a profile on Ad.ly’s website.

Companies hook up with the celebrity based on their prominence or stated interests. Once a celeb has approved a brand, that company will write the copy for an advertisement — and even do the posting. (See "Clerks" actor Jason Mewes’ tweet above.)

Offers are based on the number of followers the celeb currently has for his or her Twitter stream.

"It’s an easy way to make money," Kyle Hulcher, a publicist for Ad.ly, told TheWrap. "It’s a natural fit for celebrities because the more people who read you the more money you can make — and they tend to have the most followers."

Though some celebs are using the service to line their own pockets, others such as Greg Grunberg from NBC’s "Heroes" and former Lindsay Lohan pal Samantha Ronson are donating their earnings to charity. Ad.ly would not reveal the amount that celebrities are paid for their participation.

"We really feel like we’ve figured out a way to advertise on Twitter and in a way that gives celebrities greater control over promoting brands that they have an affinity towards," Hulcher said.