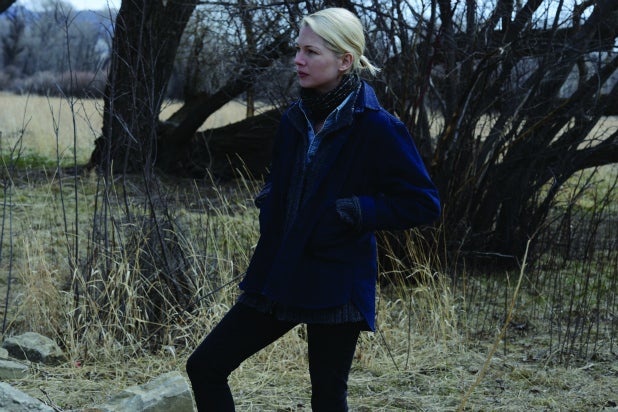 As American movies get louder and louder – seriously, outside of “The Revenant,” good luck finding anything in theaters that isn’t blasting you with wall-to-wall music and dialogue – the exquisite films of Kelly Reichardt become more powerful and more necessary. Following the haunting “Wendy and Lucy” and the bleakly satirical “Meek’s Cutoff,” Reichardt teams once again with Michelle Williams for “Certain Women,” another low-key but powerful examination of women under duress doing their best to strive and survive.

Based on a trio of short stories by author Maile Meloy (“Both Ways Is the Only Way I Want It”), “Certain Women” threads these separate tales together with skill and subtlety, crossing paths when necessary but mostly uniting them through tone and subtext. And as with Reichardt’s previous work, the film provides a showcase for the kind of acting and cinematography that’s never showy but always perfectly appropriate to the narrative.

Montana lawyer Laura (Laura Dern) leaves an unfulfilling rendezvous with her lover Ryan (James LeGros), only to be confronted with client Fuller (Jared Harris), who’s trying to sue the contractors who allowed him to be injured on the job, even though he’s already agreed to a meager cash settlement that lets his bosses off the hook. Laura takes him to a lawyer in Billings for a second opinion, and Fuller immediately capitulates when a man tells him he’s got no case, never mind that Laura has been telling him the same thing for eight months. Fuller’s frustration turns violent, and Laura finds herself in the middle of a tense situation.

Ryan, meanwhile, is married to Gina (Williams), and the two of them are building a house out in the countryside. She wants to buy a heap of weathered sandstone from local landowner Albert (Rene Auberjonois) but gets frustrated with Ryan’s oblique undermining of her charm offensive. (This is perhaps the least fleshed-out of the three stories, but if anyone can give you insight into a character with nothing more than a coordinated tracksuit and a secret cigarette habit, it’s Williams.)

Then there’s Jamie (Lily Gladstone), whose day-in-day-out drudgery at a horse farm gets a reprieve with the sudden appearance of Beth (Kristen Stewart), a frazzled young attorney who’s teaching a class in “School Law” to the local teachers. (Said educators seem to be more interested in asking about parking spaces than students’ rights.) Beth has to drive four hours each way – she thought the class was in Belgrade, not Belfry – but Jamie joins her for dinner at the local truck stop each night before she has to drive back.

Jamie’s affection for Beth, and the surprising turns that affection takes, gives “Certain Women” its most heartfelt moments; Gladstone has the open, expressive face of a silent film star, and she beams in the presence of Stewart, herself providing another understated and heartfelt performance. (If you’re still thinking of the actress as a pop-culture punching bag, you’re really not paying attention. Go stream “Clouds of Sils Maria,” and sin no more.)

This being a Kelly Reichardt movie, all the performances are rock-solid, with all the players making the most of the writer-director’s gifts at silence and suggestion. Dern has been cornering the market on beatific moms lately, so it’s a treat to watch her play an intelligent, unsatisfied, exasperated woman, and seeing the legendary Auberjonois on the prairie immediately calls to mind his supporting role in the Robert Altman classic “McCabe & Mrs. Miller.”

Montana’s legendary big-sky-country setting gives cinematographer Christopher Blauvelt (“The Bling Ring”) many colors in his paintbox, from the pewter clouds over Laura’s law office to the tangerine sunrise behind Jamie as she goes through her daily chores of taking care of the horses.

“Certain Women” gives us female characters who are smart and complicated and funny and imperfect, and it never hand-delivers a message regarding what we’re supposed to think about them. But Reichardt’s affection for her characters and their circumstances shines through every frame, resulting in the kind of intelligent and artful work for which film fans worldwide troop up the Utah mountains every January.