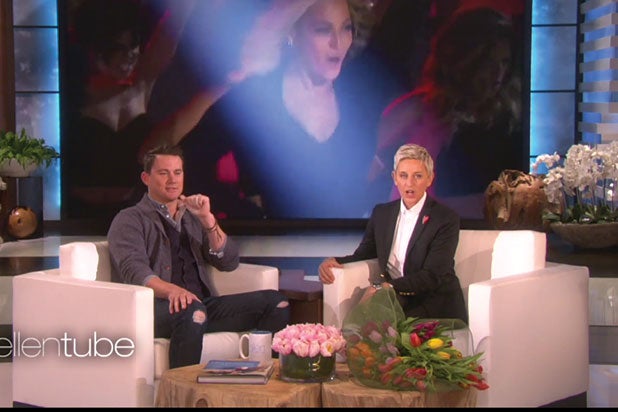 Channing Tatum blew everyone’s minds when he performed Beyonce’s “Run the World (Girls)” on “Lip Sync Battle” and subsequently brought the singer out on stage.

But he didn’t originally mean to have her there.

“It was a whole ploy to get permission to do something, because I had gotten through the grapevine that Jenna was going to bring out Paula [Abdul],” he told Ellen DeGeneres during his Thursday appearance on her show. “I was like, mhmm, who can I bring out? I know Beyonce is not going to come. I wanted to bring a cardboard cutout out of Beyonce, and then I ended up meeting Beyonce, doing Beyonce. And that was definitely the most terrifying thing I’ve ever done.”

The stellar choreography was also not rehearsed beforehand. In fact, dancing next to Beyonce on stage was actually the first time Tatum ever met Queen Bey. And right after the performance, Beyonce jetted off to her next appearance with a simple, “Hey! That was really funny! See ya!”

But it looks like Beyonce wants to hang out with Tatum and his wife, Jenna Dewan Tatum, soon.

“She was like, ‘Hey, I would love to meet you guys and hang out when you’re not looking like me and so terrifying,'” Tatum shared.

Watch Tatum’s appearance on “The Ellen DeGeneres Show” below.