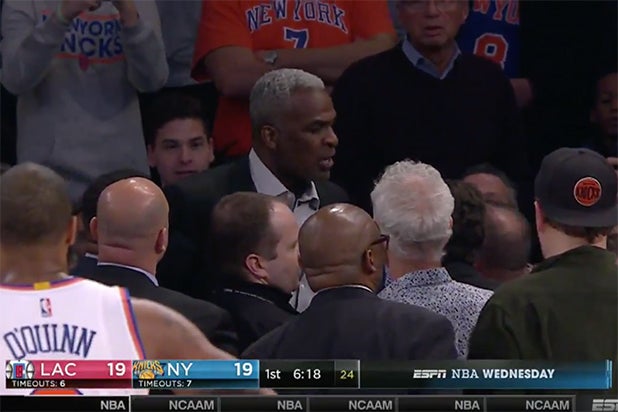 In a particularly flowery legal filing Tuesday in New York’s Southern District, Oakley’s Wigdor LLP officially sued Dolan and Madison Square Garden for the alleged defamation, libel, slander, assault, battery and false imprisonment of its client. The former Knicks power forward is seeking damages for harm to his reputation, as well as emotional distress and mental anguish, among other punitive payout routes.

The beef and soon-to-be legal battle stems from an incident on February 8 of this year, when Oakley was forcibly removed from a Knicks game. He was then banned from the Garden indefinitely, a confusing punishment that has since been lifted.

If you ask Oakley (or his colorful lawyers — seriously, you should read this thing), he did nothing wrong, disruptive or disrespectful to warrant such treatment. The 53-year-old says Dolan has just always had a problem with him — and Oakley has no idea why.

“Dolan constantly disrespected Mr. Oakley, refusing to make eye contact or shake his hand during meetings, denying him the type of fan appreciation nights given to much less popular and successful members of the Knicks, and even making him purchase his own tickets to attend games at the arena he called home for a decade,” the filing reads.

Even after he was tossed from the world’s most famous arena, the embarrassment to Oakley would get worse — and quickly.

“Over the ensuing days Defendants Dolan and MSG launched a coordinated and defamatory public relations campaign against Mr. Oakley, baselessly accusing him of abusing fans and staff, acting inappropriately and struggling with alcoholism,” Oak’s lawyers stated.

Coordinated or not, that definitely happened. And Dolan is a recovering alcoholic himself, which made those public assertions particularly weird.

The aggressive filing goes on to call the Knicks “a laughingstock in the NBA, decried for their incompetence both on and off the court.”

If nothing else, at least that part is pretty accurate.