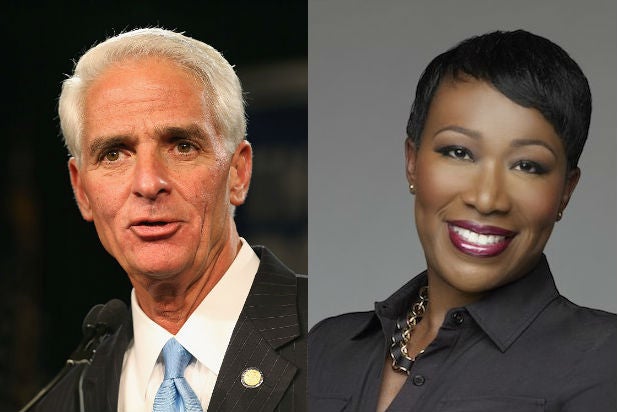 Charlie Crist has accepted MSNBC host Joy Reid’s apology for comments she made a decade ago that mocked him with language that has been criticized as homophobic.

“Long forgotten, but thank you, Joy,” he tweeted Sunday evening. “I appreciate you.”

Long forgotten, but thank you, Joy. I appreciate you.

Thank you congressman. Truly. And here’s wishing you a wonderful holiday season. https://t.co/QmCIVrB5Bm

Also Read: MSNBC's Joy Reid Apologizes for Past Comments About Gays: 'Disappointed in Myself'

In posts to her now-defunct blog “The Reid Report” in 2007 through 2009, Reid frequently referred to Crist as “Miss Charlie” while calling him closeted. She also repeated speculation that Crist married his now-ex-wife, Carole Rome, to quash rumors and increase his chances of being selected as Republican John McCain’s running mate in the 2008 presidential election, and made jokes about Crist’s professional and personal relationships. The comments first resurfaced Thursday on Twitter.

Reid apologized Sunday afternoon, saying in a statement, “I am disappointed in myself. I apologize to those who also are disappointed in me. Life can be humbling. It often is. But I hope that you know where my heart is, and that I will always strive to use my words for good. I know better and I will do better.”