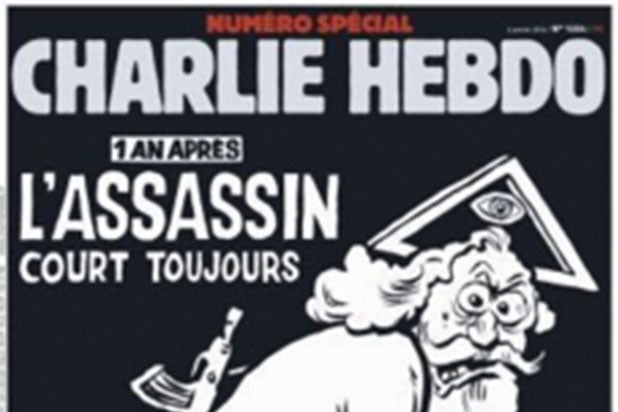 Thursday will mark the anniversary of the deadly attacks on the French satirical magazine Charlie Hebdo, which has released a special cover that blasts religious extremism.

“One year later: The assassin still at large,” the cover reads.

The cartoon features a godlike figure that is covered in blood carrying a machine gun. According to Business Insider, one million copies of the edition will go on sale on Wednesday. It will feature cartoons drawn by the murdered cartoonists, who were killed when Charlie Hebdo’s headquarters were attacked last Jan. 7 by members of ISIS in response to illustrations in the magazine that spoofed the Prophet Muhammad. Twelve people were killed in the attack.

Also Read: Charlie Hebdo Says 'Screw' ISIS: 'They Got the Weapons, We Got the Champagne!'

A week later, Charlie Hebdo released an eight-page edition in 16 different languages with a cover featuring the Prophet Muhammad — the image the magazine was targeted for publishing — with a single tear saying, “All is Forgiven.”

Charlie Hebdo marks one year since the massacre with a murderous God on its cover. The suspects are still at large. pic.twitter.com/8uGdAzDmZi