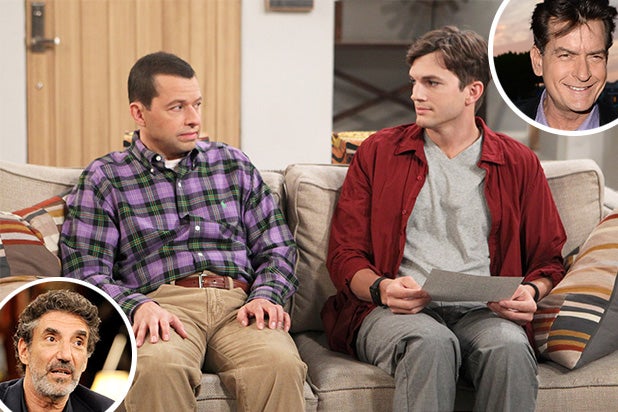 “Two and a Half Men” creator Chuck Lorre and star Jon Cryer refuse to confirm whether or not Charlie Sheen will return to the show’s one-hour series finale later this year.

Sheen was fired from the show in March 2011 for his off-screen antics, and his character was subsequently killed off. Actor Ashton Kutcher famously took over Sheen’s spot.

“I think we’re going to have a finale that you’re going to be very pleased with. That’s all I’m going to say about it,” Lorre told the audience at the Television Critics Association’s Winter Press Tour 2015.

Sheen’s former co-star Jon Cryer also chimed in on the Sheen controversy, telling reporters, “I would always like to see Charlie back, whether it’s on the finale or in life. He was a great friend for eight and a half years.”

Cryer then alluded to Sheen’s substance abuse problems, saying that the actor has not yet fully recovered from his addiction.

“He still appears to be going through some serious drug issues, so I always hope for the best for him. I honestly don’t know if he will be on our last show, but it certainly won’t be because people here don’t love him.”

But there’s still a chance Sheen’s character will be part of the big sendoff.

“It would be inappropriate to not acknowledge the extraordinary success we had with Charlie, and how grateful I am — we all are — for his contributions,” said Lorre. “There is nothing but great feelings for the eight and a half years we worked together. But how to wrap the show up? It’s tricky because, in a way, the show morphed into something else entirely for the last four years, and it’s something we love. And we want to honor both. How to honor both is the challenge of this finale.”

See video: Charlie Sheen Says Network Is Open to His ‘Two and a Half Men’ Return

In December, talk show host asked Kutcher if Charlie Sheen was coming back. Kutcher’s mouth hung open and his arms flailed about, but no words came out for a few moments. Finally, he said, “If you’re working on the Warner Bros. lot, if there’s sirens, come save me.”

“So Charlie comes back,” DeGeneres concluded. Kutcher vehemently denied saying anything, but he gave a sheepish grin and giggle, indicating he may well have said everything.