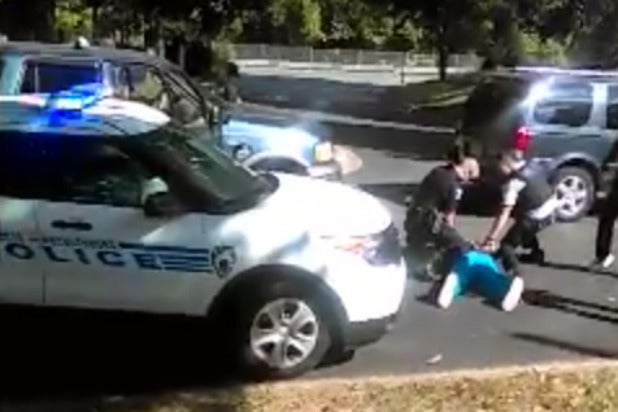 A video capturing the Charlotte, North Carolina, shooting victim’s fatal encounter with police has been released to the New York Times.

The video, captured by the wife of shooting victim Keith L. Scott with her cell phone, was released to the Times by attorneys for Scott’s family. While the footage does not depict the shooting itself, it captures the moments before and after the shooting, including Rakeyia Scott’s pleas that police not shoot her husband.

In the video, Scott tells police that her husband was unarmed.

Despite her claim, a police officer continually instructs her husband, “Drop the gun.”

Rakeyia Scott also tells police in the video that her husband suffers from a traumatic brain injury, telling police, “He is not going to do anything to you guys” and “He just took his medicine.”

Charlotte has been rocked by unrest and protests since the shooting on Tuesday, with North Carolina Gov. Pat McCrory declaring a state of emergency and a curfew being enforced by the city.

Police approached Scott after he had parked his car at his apartment complex, in a visitor’s space. Officers were present at the property to serve a warrant on another individual.