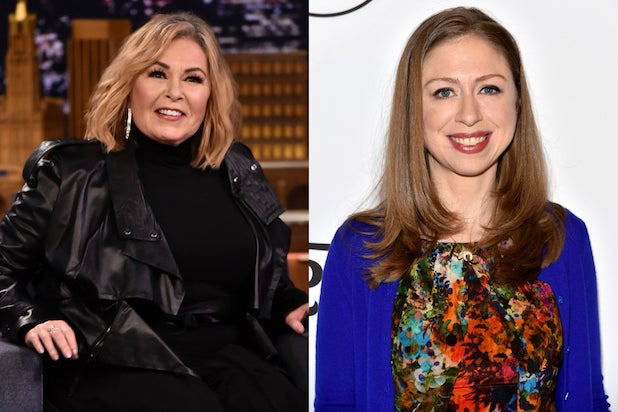 Chelsea Clinton and Roseanne Barr had a busy morning on Twitter, with the two exchanging words after Barr referred to Clinton as “Chelsea Soros Clinton.”

Clinton took the dig associating her with business magnate George Soros in stride, responding and correcting her, “my given middle name is Victoria. I imagine George Soros’s nephews are lovely people. I’m just not married to one. I am grateful for the important work @OpenSociety does in the world.”

Barr “apologized” for her joke, admitting that “we all make mistakes,” but not without making it abundantly clear what she thinks about Soros, calling him a nazi.

Sorry to have tweeted incorrect info about you!I Please forgive me! By the way, George Soros is a nazi who turned in his fellow Jews 2 be murdered in German concentration camps & stole their wealth-were you aware of that? But, we all make mistakes, right Chelsea?

Also Read: Ratings: 'Roseanne' Finale Dips, But Still Beats 'The Voice' Finale - and Everything Else

“George Soros is a nazi who turned in his fellow Jews 2 be murdered in German concentration camps & stole their wealth-were you aware of that? But, we all make mistakes, right Chelsea,” Barr tweeted.

Roseanne clarified in additional responses that her comment was “a joke,” and apologized again for incorrectly saying she was married to one of Soros’s nephews. Instead, she offered that Clinton was married to the “son of a corrupt senator.”

This exchange was just part of a busy morning for Barr in which she said she would be leaving Twitter and apologized for another dig at President Obama’s former senior advisor Valerie Jarrett. The comedian’s racially tinged comment said that Jarrett, who is African American, was the child of the Muslim Brotherhood and the “Planet of the Apes” in a now-deleted tweet.

I apologize to Valerie Jarrett and to all Americans. I am truly sorry for making a bad joke about her politics and her looks. I should have known better. Forgive me-my joke was in bad taste.

As Barr’s profile has risen with the success of the revival of her show “Roseanne,” so has her Twitter presence, in which she’s tweeted rumors, fake news and conspiracy theories. In one tweet, she suggested that President Trump freed thousands of children from pedophile rings across the globe, which The Washington Post fact-checked.