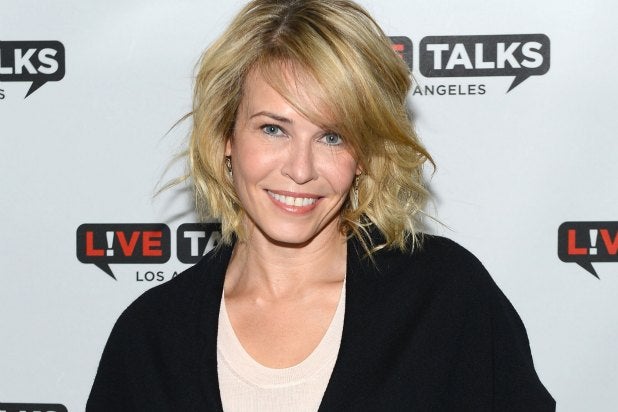 Chelsea Handler is the latest person to join the slew of accusers suggesting that Bill Cosby made inappropriate advances on her.

While the comedienne didn’t claim that she was sexually assaulted by the controversial star, she did say that it could have ended up that way if not for her film crew.

“He tried to Cosby me,” Handler told Esquire during a joint interview with Nick Offerman for its April issue.

Handler and Cosby were both performing comedy at the same Atlantic City hotel around 10 years ago, she recalled, and “at like 3 o’clock in the afternoon, someone from the hotel came down and said, ‘Oh, you know, Mr. Cosby would really like to meet you up in his hotel suite.’ And I thought, ‘That’s really weird.’

“So the three guys I was with — thank God these guys were with me — one was filming and one was like a producer. We were filming something. I brought them up with me to his room and thank God I did, because now I know what would’ve happened if I went up there alone,” Handler said.

“The Cosby Show” star has been publicly accused of raping, drugging, coercing or sexually assaulting over 30 different women since 1965, many of whom have only started to come forward in recent months. And while the comedian hasn’t been charged with any crimes stemming from the allegations, three women who’ve accused him of sexual misconduct took aim at the embattled comedian in a new court filing on Monday, saying that he’s trying to “infect” their defamation case against him and “shirks any responsibility” for the harm that he has allegedly caused.

Also Read: Bill Cosby Accusers Fire Back in New Court Filing: He Thinks He Has a ‘License to Lie’

Former E! host Handler went on to say that she had actually forgotten about her encounter with Cosby, even after the allegations came pouring out. “Then my friend texted me the other day saying, ‘Do you remember that … afternoon we went up to Bill Cosby‘s and you were so freaked out you made us come with you?’