Spike Lee‘s “Chi-Raq” opens with a stark statistic: there have been more murders in Chicago over the last decade than U.S. soldiers lost in Iraq and Afghanistan combined. Most of these killings occur in the South Side among African American neighborhoods overrun by gang violence, and for Lee, this black-on-black violence masks a more pervasive and insidious war on the black community. “Chi-raq” is Lee’s counter-strike, deploying a vast arsenal of ideas in his most audacious and lyrical film in years.

The film’s central concept is its most ambitious: adapting the 2400-year-old Greek comedy “Lysistrata,’ in which the title character organizes a sex strike among women in the warring Greek states to force their men to end the bloodshed. In Lee’s adaptation, Lysistrata (Teyonah Parris) is romantically involved with Chi-raq (Nick Cannon), leader of the Spartan gang against the rival Trojans. Their dialogue is delivered mostly in rhyming couplets, a melding of spoken word poetry and classical theater that gives the film an appealing melodic verve. The film takes ample inspiration from its source, even enlisting Samuel L. Jackson to serve as a Greek chorus, commenting on the action in a manner reminiscent of Jackson’s role in Lee’s “Do the Right Thing.”

After a young girl is killed by a stray bullet in a gang shootout, Lysistrata lights on the idea of a sex strike from Miss Helen (Angela Bassett), who points her to the real-life example of Leymah Gbowee, an organizer of such protests during civil war in Liberia. But for Miss Helen, the bigger enemy is gun culture at large, which she explains in verse: “Ask the parents of Sandy Hook / when their kids get killed and things don’t change / saving black children is way out of range.”

During the funeral for the murdered girl, the blame gets placed even more squarely, as a priest played by John Cusack calls out “politicians who are in the pocket of the NRA.” At a time when intense scrutiny has been focused on police brutality, the film offers a striking image of a white cop and a black gangbanger standing side by side holding armfuls of guns. It’s clear that Lee sees the industrial proliferation of firearms as feeding, worsening, and profiting from both sides of the conflict. 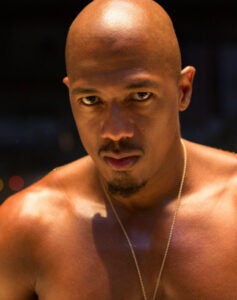 Lee’s stand-in heroine thus leads her army of chastity belt-wearing comrades to raid a National Guard Armory using nothing but their female charms. Somehow this involves Lysistrata handcuffing the base commander while he humps a giant black cannon in nothing but his Confederate underwear. The script, co-written by Lee and Kevin Willmott (“C.S.A.: The Confederate States of America”), indulges in the bawdy potential of the story’s sexual conflict: At one point Samuel L. Jackson delivers an extended stream of genital and sexual slang terms, none of which can be repeated here.

The film’s climax, in more than one sense, involves a “screw-off” between Lysistrata and Chi-raq on a giant brass bed in the middle of a sports arena. But the crudeness of such outrageous moments can be seen as a deliberate counterpoint to the vulgarity of an everyday violence that is all too real, as if to confront us with our own desensitization at what we really should find shocking.

If the film’s pinning much of the world’s problems to sex at times seems excessive, silly or reductive, Lee justifies it with moments of unexpected grace. The Chicago mayor’s deputy (Harry Lennix) lights on a plan to blast R&B ballads to arouse the women militants out of their sex strike. This leads to a bizarrely enchanting musical sequence where the women dance inside the Armory while the National Guardsmen dance outside, each yearning for the other.

Such moments of tenderness are as unexpected as they are genuine; it helps that Lee’s cast can navigate the film’s wild ranges in tone. Teyonah Parris shows great sensitivity beneath the requisite toughness of Lysistrata. It’s great to see her thrive with material that’s much more substantial than her role as the secretary Dawn in “Mad Men.”

Nick Cannon also breaks through as Chi-raq, proving especially powerful in later scenes as his character discovers his conscience. Veterans like Bassett and Jackson are a welcome presence, as well as Wesley Snipes, amusingly manic as the one-eyed, orange-suited leader of the Trojans. Dave Chappelle makes a cameo as a beleaguered club owner affected by the strike: “This situation is out of control / ’cause I’m in front of an empty stripper pole!” Only in Spike Lee‘s world could such a punchline segue into a funeral sermon for a murdered child.

Ultimately these moments amount to Spike Lee‘s vision of Chicago as an inspired and slightly deranged vision of Black America itself, in all its vitality and violence, its striving and strife. Chicago critic Jonathan Rosenbaum once said that Lee’s filmmaking “risks absurdity to achieve the sublime.” In “Chi-raq,” Lee mixes fierce agitprop with lyrical musical numbers and Greek-inspired sex farce in hip hop verse. It’s a mad combination that fittingly addresses a world of madness.