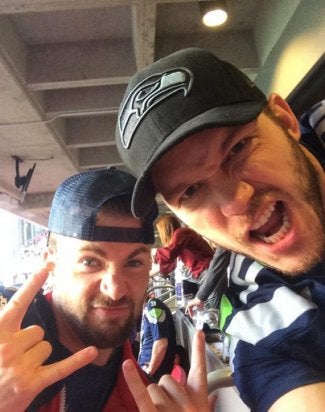 It was a superhero battle for the ages between two of Marvel’s heaviest hitters. Chris Evans aka Captain America took on Chris Pratt aka “Guardians of the Galaxy’s” Star-Lord in an epic Super Bowl showdown, with both men showing up at the game to see who would emerge victorious.

Once the Patriots had secured their victory, Pratt had to admit to defeat. But it turns out nobody loses when heroes battle.

The stakes of the bet were such that the loser had to travel to the winning team’s city and visit a children’s medical facility dressed as their respective Marvel character. Either Captain America was coming to Seattle Children’s or Star-Lord was flying out to Christopher’s Haven in Boston.

The two men battled it out online with verbal taunts in the days leading up to the big game, while also setting up phone lines to take donations for both organizations. And in the end, they proved what true heroism is.

After his Seahawks lost, Pratt tweeted, “Congrats to the world champion @patriots you were the better team tonight. I will be visiting @chris_haven as Starlord.”

But Evans had even better news, taking to Twitter to respond, “Thank you to @prattprattpratt for being a good sport. I’ll be there with you at @chris_haven, and don’t worry @seattlechildren, well be coming there too!”

Also Read: Inside the Super Bowl: 9 Things You Didn’t See on TV

That’s right, everybody wins and both cities will be getting visits from Captain America and Star-Lord.

Congrats to the world champions @patriots you were the better team tonight. I will be visiting @chris_haven as Starlord. #twitterbowl

Thank you to @prattprattpratt for being a good sport. I’ll be there with you at @chris_haven, and don’t worry @seattlechildren, we’ll be

coming there too! And lastly, I don’t think anyone can ever doubt the mental toughness of Tom Brady. Tough couple weeks, but he showed why