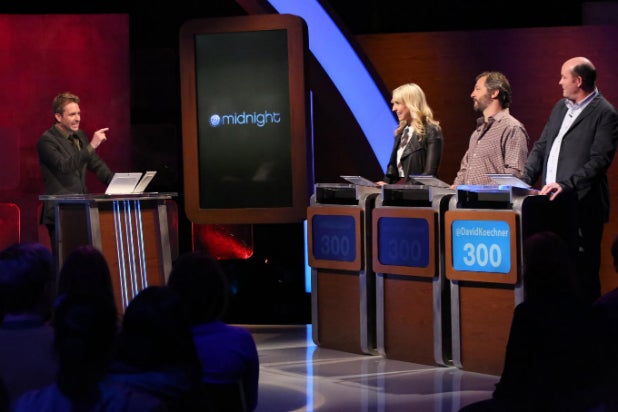 If you’ve ever wondered why your Twitter timeline starts buzzing around midnight with bizarre hashtags like #DrunkFilms, #FrozenBands or #SadToys, Chris Hardwick probably has something to do with it.

Hardwick’s “@midnight” on Comedy Central – a half-hour comedy/talk/game show hybrid that, as its name suggests, deals with all things internet and social media – is arguably the best series currently on television when it comes to harnessing social media buzz. The show proves that social media awareness is an increasingly critical indicator of a show’s popularity.

Also read: Chris Hardwick’s Epic Journey to Nerdist: ‘I Was Becoming a Drunk Guy Who Used to be on TV’

In just four months since the show’s premiere in October – including a month-long hiatus over the winter holidays – “@midnight” has exploded in both social metrics and traditional ratings.

And in the process, the show has begun to change the face of late night TV.

According to Nielsen SocialGuide, which measures Twitter buzz, “@midnight” ranked an average of second place in the Late Fringe (11 p.m. to 2 a.m.) category, starting from its premiere on Oct. 21 until Jan. 27. It beat out all other late night shows, including fellow Comedy Central talkers “The Daily Show” and “Colbert Report.” (See chart below.)

“It was pretty instantaneous, and it’s now growing, and that’s been really rewarding.”

Jimmy Fallon‘s debut week as host of NBC’s “Tonight Show” — the week of Feb. 17 — was the same week “@midnight” had its best ratings ever, with an average of 731,000 total viewers. The show is rapidly increasing its share of the 18-to-49 demographic and the even more coveted young male demo.

“Jimmy Kimmel, and Seth Meyers, and Jimmy Fallon, they’re all great, they’re all guys we really respect and admire,” said Mike Farah, executive producer and Funny or Die president of production. “But I do think Hardwick’s show… just brings a slightly different take to it.”

The secret ingredient was there from the start.

“Built into the DNA of the show, there’s an organic relationship between comedians and the internet and social media,” Alterman said. “And that instead of it being, ‘Oh let’s add a social media element on top of something else,’ as an appendage or an afterthought, it’s an intrinsic part of the show.”

Hardwick, a self-described “citizen of the internet,” is also the key component of “@midnight.” The consummate comedian and TV host built a media empire in 2008 with Nerdist, which, as the name suggests, deals with all things nerdy: science, video games, comic books — basically everything Hardwick loves.

That passion easily translates to his duties on “@midnight.”

“We’re in the demographic of the stuff we’re making,” Hardwick said. “We’re not up, aiming down at you and trying to fish money out of your pockets.”

“People understand that shows need ratings and products need to get sold, and there’s this model of advertising and sponsorship that keeps everything afloat, but they still don’t have any patience for condescension, being inauthentic, or just barking at them, ‘Buy my thing! Buy my thing!'” he added.

That’s where those bizarre hashtags come in.

At its core, “@midnight” is a comedic talk show — but it uses a game show engine to keep churning out the jokes. One of the nightly games is “Hashtag Wars,” which pits the three comedian contestants against each other to come up with as many ridiculous examples of the theme as they can.

If the topic is #FrozenBands, for example, a tweeter at home might play along by tweeting, “New Kids on the Block of Ice #FrozenBands @midnight.”

But while the comedians only have 60 seconds, viewers at home have all night to tweet-in their suggestions and one-up each other for coveted POINTS! from the @midnight Twitter account. Viewers can also get a chance see their tweet air on the next episode. What results is a massive hashtag conversation that hits the top 10 nationwide trends on Twitter — every single night.

“There’s a thing that comedy fans do on social media, and we want to have it feel like a home and not like we’re sort of breaking into a party they’re already having,” said Joe Farrell, the show’s co-executive producer and Funny or Die’s director of development.

“There are people that are playing hashtag war every night, that are doing some of the funniest stuff that rivals some of the comedians we have on,” he added.

Hardwick, who also serves as an executive producer on the show, agreed that the communal yet competitive attitude within the Twitterverse watching “@midnight” drives the show.

“It really is about, you know, just being part of this little weird community that we’ve established,” he said.

“It was never our goal to say, ‘Let’s try to get as many Twitter followers as we possibly can,'” Hardwick added. “I feel like that’s a flawed goal, because you’re aiming for the wrong thing. Our goal was, how can we have as much fun and engage people as much as possible.”

Compare that approach, Hardwick said, to TV series and media companies that use their social media presence solely as a promotional tool.

“Social media doesn’t work well when you’re just promoting at it,” he said. “It’s a system, and you have to keep replenishing the system. And sometimes that means adding things to it that don’t promote you, that you’re just sharing with the world.”

So far, viewers seem to be buying in. Alterman said “@midnight” is slated to run until at least the end of September, the end of Comedy Central’s 2014 budget year.