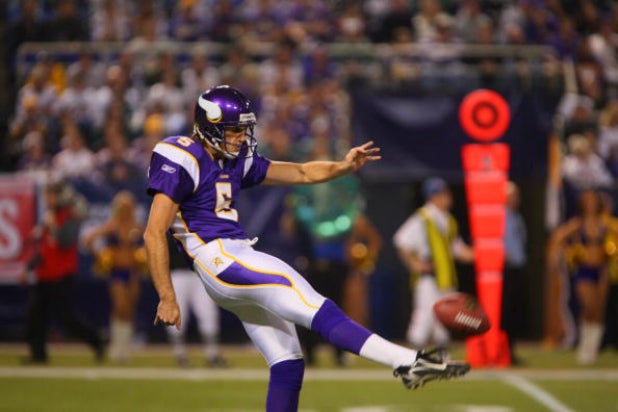 Former Minnesota Vikings punter Chris Kluwe penned a strongly accusatory editorial for Deadspin, and the headline is pretty self-explanatory: “I Was an NFL Player Until I Was Fired By Two Cowards and a Bigot.”

In the piece, published Thursday, the Vikings all-time leading punter contends that he was released from the team before the current NFL season because he chose to speak out in support of gay marriage. While Kluwe claims he had the support of team owner Zygi Wilf, the now-former Viking believes that he was let go because he became a problem for Head Coach Leslie Frazier (“Coward”), General Manager Rick Spielman (“Coward”) and Special Teams Coordinator Mike Priefer (“Bigot”).

“I honestly don’t know if my activism was the reason I got fired,” Kluwe insisted. “However, I’m pretty confident it was.”

Kluwe was the Minnesota punter and placekicking holder for eight seasons. In 2012 he also became somewhat of a spokesperson for Minnesotans for Marriage Equality, a group that helped voters defeat the Minnesota Gay Marriage Amendment. Gay marriage is now legal in the state.

At first, all was good between Kluwe and his high profile employer, he says. But as the player chose to ignore mounting team recommendations (and even more overt calls for silence), Kluwe alienated himself from the staff members named in his piece. The punter alleges that despite a productive season and successful recovery from knee surgery, he was replaced without a chance to compete.

Kluwe believes that the physical gifts are still there (“I can still hit the ball 45 yards outside the numbers with good hangtime”), but that the Vikings parted ways to avoid a headache.

“At the tryouts I’ve had this year I’ve gotten praise from the scouts and personnel people on hand, but for whatever reason I cannot find a job,” Kluwe somewhat rhetorically ponders in the piece. “However, it’s clear to me that no matter how much I want to prove I can play, I will no longer punt in the NFL, especially now that I’ve written this account.”

Kluwe closed his piece by saying, “It’s been a fun eight years; sometimes people do crappy things to each other.”

Minnesota finished with a record of 5-10-1 this season, good for last place in NFC North, and Frazier was fired. In the offseason, the team drafted new punter Jeff Locke 155th overall — the highest-drafted punter in franchise history. Locke’s 44.2 yard per attempt average ties him for 24th in the league (out of 33 qualifying punters), according to ESPN.com.