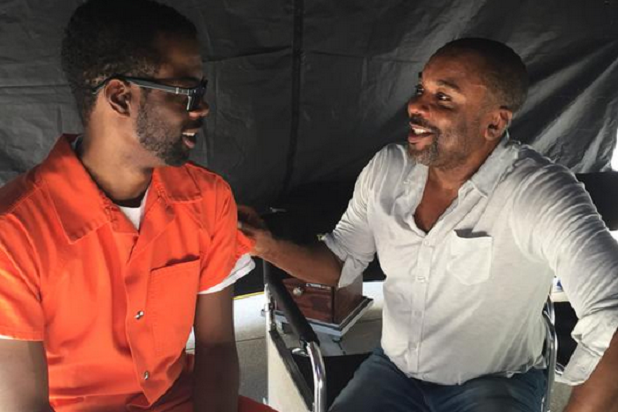 After having a blockbuster first season, Fox’s hip-hop drama “Empire” is returning for Season 2 with some extra star power.

Chris Rock was on the set Tuesday to film the first episode, playing a man from Lucious Lyon’s past who is also a prisoner in the same jail.

While both actors dressed in orange jumpsuits for shooting at Chicago’s Cook County Juvenile Detention Center, they were also captured on a video for creator Lee Daniels‘ Instagam page.

“My first day was incredible, I worked with the great Terrence Howard,[and] the great Lee Daniels,” the “Top Five” director and star said. “Terence punched him in the stomach by accident.”

“I don’t know if it was an accident, he does have a reputation,” Rock joked, touching a little too close to home regarding Howard’s past.

“Oooh!” Daniels exclaimed in mock shock, but fortunately they all saw the funny side.

In photos from the set, Lyon (Howard), who was incarcerated for murder at the end of the last season, is also seen playing chess with fellow inmates and hanging out in the recreation yard.