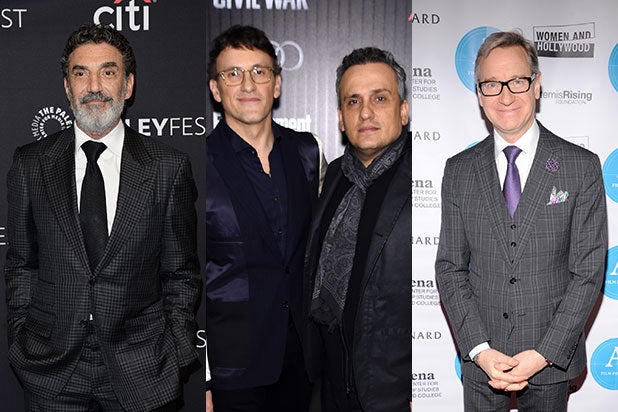 Chuck Lorre, “Captain America: Civil War” filmmakers Joe and Anthony Russo and “Ghostbusters” director Paul Feig have been added to the speakers lineup of the 2016 Produced By Conference.

The “Conversations With…” panel will feature intimate discussions with Lorre, “The Good Wife” creators Robert & Michelle King and the Russo brothers.

The 2016 Produced By Conference offers more than 30 panel discussions including roundtables, networking opportunities and workshops. This year’s conference will take place on June 4 and June 5 and is hosted by Sony Pictures on its studio lot.

See the entire lineup of newly added speakers below.

2nd SEASON AND BEYOND: HOW TO SUSTAIN YOUR UNSCRIPTED SHOW

20 SECONDS TO DISASTER: CREATING A SAFEPRODUCTION TO PROTECT YOUR CAST & CREWSponsored by HUB Entertainment Insurance

THE ART AND CRAFT OF PITCHING FOR FILM

THE ART AND CRAFT OF PITCHING FOR TELEVISION

FIELD OF VISION: HOW NEW TECHNOLOGIES ARE REDEFINING CINEMATOGRAPHY AND FINISHINGSponsored by ARRI and Technicolor

INTEGRATING SOCIAL MEDIA AND MOBILE INTO YOUR MARKETING AND DISTRIBUTION CAMPAIGNS

IS THE SKY FALLING?: THE CHALLENGES AND OPPORTUNITIES FACING INDEPENDENT FILM PRODUCERS

THE NEW CREATIVES: HOW THESE ‘FIRST TIMERS’ GOT IT RIGHT

A SEAT AT THE PRODUCTION TABLE: WHICH PROJECTS GET FINANCED? Sponsored by Entertainment Partners

SHOOTING OVERSEAS? HOW TO FIND THE BEST LOCATIONS, PARTNERS AND PRODUCTION INCENTIVESSponsored by Delta Air Lines

SOCIAL CHANGE AND THE BOX OFFICE: THE POTENTIAL OF GENDER PARITY, DIVERSITY AND STEMSponsored by SAG-AFTRA

TOP 5 THINGS EVERY PRODUCER SHOULD KNOWSponsored by Momentous Insurance

WORKING WITH THE MILITARY FROM SCRIPT TO SCREEN

The PBC’s Mentoring Roundtables, sponsored by Panasonic, are now open for registration and include sessions with the following mentors: