Todd, the moderator of “Meet the Press,” and no stranger to MSNBC after anchoring the “Daily Rundown” for years, thinks now is the time for NBC to finally let loose its resources to elevate MSNBC.

Todd got his wish with the new daily MTP. And if Sundays are guest driven, the new version will be more news driven. He touched on that and a whole range of 2016–and MSNBC–questions in a wide-ranging interview with TheWrap.

TheWrap: After one year as “Meet the Press” moderator, ratings and show energy are up. What’s been the recipe?
Todd:
In the last three months, we’re just in sync and the network’s in good shape. I’ve never felt like we’ve all been rowing in the same direction of this company more than the last three months. All the show interactions; it all feels good and gives you more confidence when you’re working on your own show to be comfortable in what you’re doing. Everybody feels a little bit more secure and confident at this network, and I think in three months, we’ll be saying the same thing about MSNBC.

TheWrap: MSNBC’s ratings plummeted in the last two years. Is a hard news surge a good strategy in a sea of breaking new outlets?
Todd: How do you give MSNBC the best shot at success and what are the best resources of NBC News? When you put all of it together let’s see how it works. We haven’t tried it in this iteration of where the news business is. The 90s are the 90s [MSNBC debuted in 1996]. There’s always been a passion for, “We’ve got all these great resources, I wish we had an hour of Nightly [News], I wish we had a 5th hour of ‘Today,’ I wish we had a second hour of Meet the Press?’ Now, it’s like ‘Why aren’t we merging our resources well with MSNBC?’ I get it, people are questioning whether it will work or not, but if you enjoy what you’re doing, that will come across on-air and ultimately people will gravitate toward that.

TheWrap: Pundits have said your interview with Hillary Clinton on Sunday represented a more authentic tone. Was it a game changer for her?
Todd: [He prefaced he’s always uncomfortable judging his own interviews] I’d like to think I didn’t leave many questions un-asked. I’m sure I spent more time on the topic [email controversy] than they wanted or they hoped for, but she seemed to be determined to make sure it didn’t look like it bothered her.

TheWrap: President Clinton recently blasted the media’s coverage of the email scandal. Any validity to the media making Hillary its 2016 Piñata?Todd: For 25 years [of my career], people who don’t get attention think the media is to blame [and frontrunners think media is to blame for negative coverage]. From the Clinton point of view, they have always viewed the media as antagonist to them. I’ve never met a politician who hasn’t felt the media has been antagonistic to them at some point in time. Those who we’re covering are the wrong people to judge. 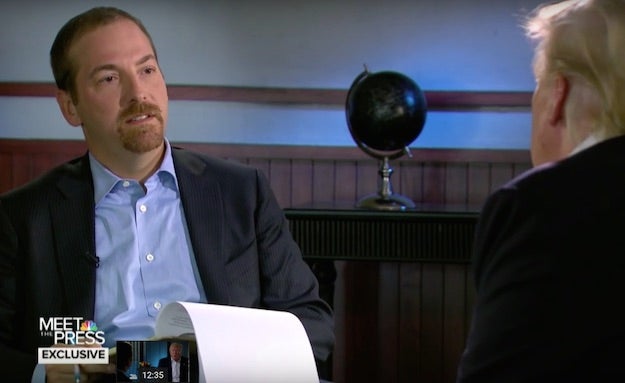 TheWrap: Despite the best efforts of high-profile journalists like you, Donald Trump has successfully filibustered offering specifics regarding his policy proposals. Can he shuck and jive his way to Iowa?
Todd: No candidate has been able to pull that off; you have to eventually give some details. Honestly, I think that’s why they gave so much effort into promoting their tax plan today. That was a different Trump today; he was very careful in what he was reading when he was introducing the plan. He’s usually a guy that wings it, the most interesting thing I thought today was I saw him reading from something. We’ll see whether this is what he does going forward.

TheWrap: There’s been a lot of criticism toward CNN and MSNBC for wall-to-wall Trump coverage. Is the media culpable in the rise of the current frontrunner?Todd: Is it the media or is it Trump? For a couple decades, the conventional political consulting decisions were to avoid the media, try to go above and around them. Donald Trump’s mindset is be accessible; he’s certainly the most accessible candidate any of us has covered since McCain 2000. What I’ve noticed is other campaigns realize this philosophy of avoiding, avoiding, avoiding [is wrong] and instead make yourself accessible. The one lesson other campaigns have learned from Trump is, ‘Maybe I shouldn’t be afraid of talking to multiple media outlets on any given day.’

TheWrap: But hasn’t another lesson learned been to say outrageous or racist things to get media attention (Mike Huckabee, Ben Carson?)
Todd: That’s something somebody at 1 or 2 percent thinks. Look at some of the other candidates that haven’t just done that but have done more interviews. You can make an argument Hillary Clinton has made herself more available this month, but she’s not trying to throw rhetorical bombs.

TheWrap: If Vice President Biden jumps in, how does the dynamic change as the media salivates for a Biden-Clinton or Biden-Trump showdown?
Todd: The Republican race in general has been getting more coverage; if you suddenly have a competitive Democratic primary with a sitting Vice President and a former Secretary of State, it presents an odd dynamic: who gets lost in that shuffle? Does it keep frontrunners in place or make it harder for somebody sitting in single digits? Does it affect Donald Trump or does it solidify him at the top for awhile?