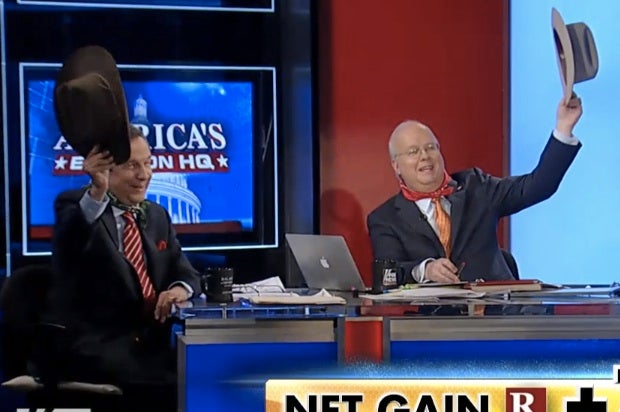 If Fox is really fair and balanced, where were the Indians last night?

Also read: Bill O’Reilly and Karl Rove Will Not Be Gambling Together Anytime Soon

Wearing a cowboy hat and bandana, Chris Wallace welcomed viewers with a cheery “Howdy partners!” as Megyn Kelly and Bret Baier tossed over to his panel with  Karl Rove and Joe Trippi.

“I know I look ridiculous, but by this time of the evening either you’re drunk or you have a sense of humor,” Wallace said hopefully.

Turning to Rove, he kept the gig going. “Karl, we are the campaign cowboys … now, listen and listen good, partner.”

The trio went on analyzing midterm results for several minutes in a business-as-usual style, despite still wearing the cowboy threads. Wrapping at the end, they tipped their hats.

“From the campaign cowboys, happy trails to you, until we meet again.”

“This has been a real Edward R. Murrow moment for you guys,” Megyn Kelly responded.