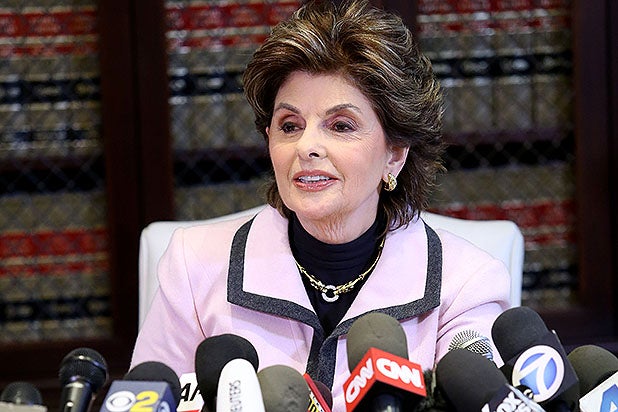 Civil rights attorney Gloria Allred is facing a preliminary investigation by the California State Bar, one of her former clients said.

Kyle Hunter, a television weather reporter, said in a written statement that he has been “notified by The State Bar of California that they are investigating Ms. Allred.” Hunter hired Allred to represent him in a failed discrimination lawsuit against CBS in which he accused the network of passing him over for jobs and instead hiring reporters “cut from the same blond, attractive, buxom mold.”

Hunter said he is providing his “complete cooperation” to the State Bar and “will continue to do so.”

Hunter told the TheWrap that he felt betrayed by Allred when he found out that she had negotiated an untitled television series with CBS based on her life at the same time she was representing Hunter in his lawsuit against CBS Broadcasting, but never told him about the deal.

Allred declined to comment on Hunter’s statement about her CBS television deal when reached by TheWrap. But she said that her firm had “not been notified by the State Bar of any complaint or any investigation.”

“Someone has attempted to shake me down by threatening to report me to the State Bar unless I paid him a large sum of money,” Allred said in a written statement. “I have refused to pay this individual any amount of money.  I will not be threatened or bullied by false accusations.”

Allred said she has “a spotless record with the State Bar in the more than 40 years that I have been an attorney” and that she has “no intention of allowing anyone to harm my reputation by making allegations against me which have no merit.”

Because State Bar investigations of attorneys are confidential, the State Bar will not say whether it is investigating Allred. But the legal news website Law Newz also reported it has reviewed a letter from the State Bar saying that its Enforcement Unit is conducting a preliminary investigation of Allred.

In an interview with TheWrap, Hunter declined to say whether he had filed a complaint against Allred with the State Bar that triggered the current investigation.

“Newsroom” writer/executive producer Deborah Schoeneman told reporters in September 2015 that she had a script deal with CBS Television Studios for an untitled legal drama series inspired by Allred’s life, with Allred as an executive producer.

According to California legal ethical rules, attorneys are not supposed to pursue personal interests that are in conflict with their current client’s interests without informing the client and getting approval. It is not clear that Allred’s deal with CBS Television Studios would be a conflict with her representation of Hunter against CBS Broadcasting, a different division of CBS.

CBS did not immediately respond to a request for comment.

Allred has worked on a slew of high-profile suits, including a a defamation case filed by “Apprentice” alum Summer Zervos, who claims President Donald Trump falsely branded her a liar after she accused him of grabbing her breast without her consent and unwanted aggressive kissing. Allred’s political activism included serving as a delegate for Hillary Clinton.

Also Read: Is There a First Amendment Right to Hire 'Buxom' Weather Reporters?

In his lawsuit against CBS Broadcasting, Hunter claimed that CBS hired less-experienced women reporters instead of him, which he said was due to age and gender discrimination. Allred’s Los Angeles firm, Allred Maroko & Goldberg, represented Hunter during his litigation against CBS starting from the filing of the lawsuit in March 2012, continuing through two California Court of Appeal decisions in 2014 and 2016, and back in the Los Angeles Superior Court through September 2016.

The Court of Appeal dismissed Hunter’s case on Jan. 19, 2016, ruling that CBS had shown that it did not discriminate against him because it employed both young women and middle-aged men as weather reporters.

Not only did Allred lose Hunter’s case against CBS, but Hunter also learned that CBS used an obscure California law called the SLAPP statute to win dismissal of his case and saddle him with CBS’s legal bills.

Normally, a losing plaintiff does not owe any legal fees to his attorney or to the company he sued.

“When it was all over, . . . I got an email telling me that it I had to pay CBS $800,000 for attorney’s fees and costs,” Hunter said. “I told them I would have to file for bankruptcy because I don’t have that kind of money.”

Hunter said he did not pay CBS any money and his case against CBS has settled, but he would not disclose the terms of the settlement.

“I think CBS felt sorry for me,” he said.

The SLAPP law was enacted by California lawmakers in 1992 to protect journalists, whistleblowers, activists, and others from meritless lawsuits aimed at chilling First Amendment speech about government actions and other matters of public importance.

But CBS persuaded the appellate court to expand the SLAPP law by ruling that news companies are exercising their First Amendment free speech rights when making employment decisions for on-air talent and therefore the news companies can use the obscure SLAPP motion to get rid of many job discrimination lawsuits and slap losing plaintiffs with big legal bills.

“Had this case gone to trial, and I’d lost, well fine,” Hunter said. “But this has hurt me much more than going to trial and losing.”