WikiLealks is the gift that keeps on giving to the GOP.

Within WikiLeaks’ latest batch of emails it hacked from Clinton campaign chairman John Podesta is one that hits a potentially racial note.

In it, a Clinton staffer shared a tweet posted by host of MSNBC’s “All In With Chris Hayes” shortly after the San Bernadino, Calif., mass shooting that killed 14 people and seriously injured 22 others.

The tweet read: “NBC News now reporting a US citizen named Sayeed Farouk [sic] believed to be one of the people involved in the shooting.”

Podesta agreed, writing, “Better if a guy named Sayeed Farouk [sic] was reporting that a guy named Christopher Hayes was the shooter.”

The Democratic National Committee has not verified the authenticity of the emails, though its servers were hacked earlier this year by a group U.S. authorities believe was led by the Russian government. Batches of emails have been released by WikiLeaks.

On December 2, 2015, two heavily armed assailants entered a social-services agency in San Bernardino, and opened fire during a holiday party. About four hours later, local police located a dark-colored SUV and engaged in a shootout that killed two suspects, one male and one female.

They were later identified as Syed Farook, 28, and his wife, Tashfeen Malik, 27.

Farook, a U.S. citizen, worked for San Bernardino County and attended the party where the shootings took place, and “did leave it early under some circumstances that were described as angry,” San Bernardino Police Chief Jarrod Burguan said at the time.

Farook subsequently returned to the event with Malik, both dressed in “assault-style” clothing and carrying .223 Cal assault rifles and semiautomatic handguns. 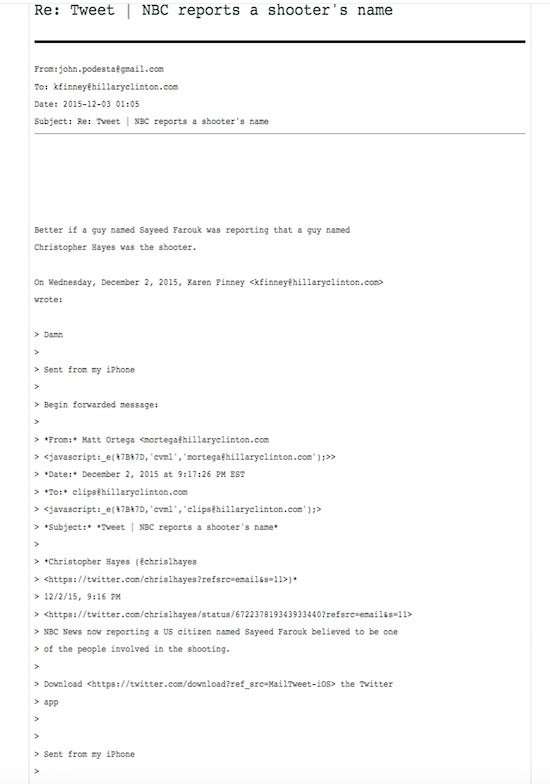