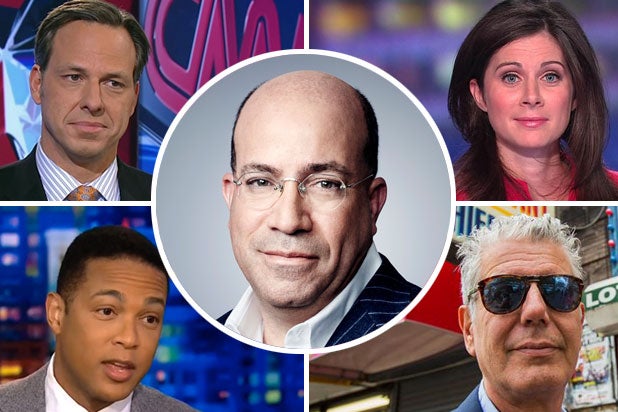 Outside of CNN President Jeff Zucker‘s office, the newsroom is humming with activity. Host Brooke Baldwin is live, a digital meeting is underway and a new sense of confidence permeates the air. Two years ago when Zucker arrived the 24 hour cable news network was all but declared a dwindling relic of the past. Now it is making its move.

The original cable news network surged past ratings-challenged MSNBC into second place in 2014, finishing the year in front of the “Lean Forward” network in all measurements aside from primetime total viewers.

The formula: riding the coattails of breaking news — in many cases stretching that news far beyond its natural life cycle — mixed with a heap of original series. When Zucker deployed the latter, spearheaded by Anthony Bourdain, John Walsh and Morgan Spurlock, media critics howled he was stomping the news right out of the organization most trusted for it.

“Everyone said we were getting out of news,” Zucker told TheWrap in an exclusive interview, defiantly flipping his hand in dismissal of the media chorus. “We doubled down on news.”

The CNN chief also touched on the blending of news and original series, his talent expressing their views on certain stories and more in a wide-ranging interview with TheWrap last week.

What are some of the broader factors that allowed you to make significant gains in 2014 and 2015?
I think we’ve reconfirmed that CNN stands for news, and our commitment to covering news on a global scale is clear. And there’s been a tremendous amount of news — especially international news — and we’ve committed to covering that … Covering news coupled with the original series strategy has given us a very firm footing.

Has focusing on individual stories [Malaysia Airlines, Ebola outbreak] for longer been a key to your success?
I think what people didn’t understand about the plane [missing Malaysia Airlines Flight 370] is that was the strategy. And we’ve born that out whether it was Ukraine, or Ferguson, or the Paris terror attacks; whatever the story was, we have the resources to go all in on that story. We’re covering every story in the world — we’re just not necessarily putting every one of them on television. Our digital strength continues to be tremendous. That is what I think people haven’t fully appreciated, and that is a fundamental strategic shift. I do think the strategy of honing in on whatever the two or three major stories of that time are has really worked and obviously something we’re going to continue to do.

Are you concerned with pushing away longtime CNN viewers who want all the news on CNN TV?
Good question, but wrong. Because what’s actually increased at CNN is the length of tune-in of our viewers, meaning that those viewers are actually watching for a longer length of time each time they come. So, we’re not alienating those viewers; actually by giving them what they’re interested in and more of it, they’re staying longer. That criticism from media critics — it may be a media criticism — but actually has been completely the opposite for our viewers. And our viewers have actually completely responded to it, and our length of tune-in has actually increased.

In terms of the broader CNN, it seems anchors like Don Lemon and Jake Tapper seem comfortable showing more of themselves and their opinion. Does that come from you?
It doesn’t come from me urging them to do it, but it comes from knowledge on their part that we’re comfortable with it. I hope I’ve encouraged an atmosphere were they know that is OK, and we’re comfortable with it. I think that’s made CNN better. I think what Jake did in Paris; what Jake did in calling out folks who didn’t vaccinate their children; I think Chris Cuomo’s 25-minute, uninterrupted interview with the Chief Judge in Alabama is another example of it. Anderson Cooper’s on-air reaction to Bob Simon’s death; Wolf Blitzer personalizing his experience in going back to Auschwitz where his grandparents lost their lives — I think that has all made our air more authentic.

In previous years, critics said CNN was stuck in the 20th century of news, without a real identity in the increasingly partisan news world. What’s your identity now?
News. New. I believe we have reestablished the brand identity that this is the place for news. When the Paris terror attacks happen, when war breaks out in Ukraine, when unrest happens in Ferguson, people know that CNN is the place to come. News is our brand, and I think we’re doing more news in the morning, we’re doing more news all day, we’re doing news. We’ve added in the last year, five hours of additional news by doing news from 12 midnight to 5 a.m., so there’s more news on the network, so that has helped. We are basically doing live news 22 out of 24 hours a day. Everyone said we were getting out of news. We doubled-down on news.

Are programs with Anthony Bourdain and Bill Weir traveling around the world in some ways redefining news by going out and finding interesting stories?
Yes and no. We’re just broadening the definition of what news is. We have doubled down on covering news, especially global international crises, but at the same time, we’ve also introduced this original series strategy that is not entertainment. It’s informative, educational, interesting; you learn as much from Anthony Bourdain, or Bill Weir, or Morgan Spurlock as anything else. I think we’ve been willing to broaden out what we define as news, and I think that’s allowed us to do series like Weir, Spurlock, Bourdain and Lisa Ling. And I think that’s really helped.

As your numbers go up, why has Fox and MSNBC’s numbers gone down?
Listen, we should only have Fox News’ numbers. We’d be thrilled to have Fox’s numbers, and they deserve a lot of credit. With regards to MSNBC, I can’t speak to why they’ve declined dramatically — we’re just focused on what we’re doing here now.
*CNN up 51 percent, Fox News up 5 percent in all-important primetime news demo while MSNBC is down 45 percent for 2015

Is there a risk for your competitors who don’t adapt to changing viewer habits and continue to ride their partisan success?
I can’t speak for my competitors, but our digital investment and strength is so important to us, and why we’re spending a tremendous amount of time on it. Digital is so strong here and so important to our future and a real driver for both our profitability and success. We think we’re completely adapting to that and we think our digital strength feeds off our television success and vice versa.

What about the old news stalwarts who have a rigid line that says Jake Tapper should just give us the news, you see no issue with that?
No.

Are you guys happy with second place, or do you strive for No. 1?
No. We strive to do the best we can do every day, and that’s report the news. We are a global network in television and in digital, and our goal is to do the best journalism every day. We have tremendous respect for our competitors, and our focus is on ourselves. Moving from third to second is not something we spend a lot of time thinking about, and we don’t spend a lot of time thinking about.

New streaming networks have been popping up. Any plans of your own?
No. We do that every day: That’s called CNN television. We don’t need to do that because we do it on a day-to-day basis.