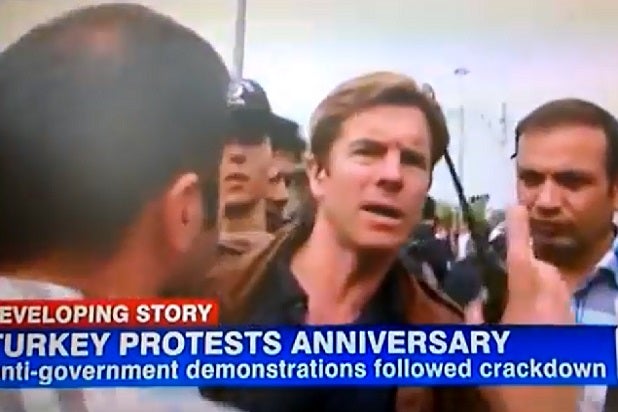 CNN reporter Ivan Watson encountered an occupational hazard on Saturday, as he was detained by Turkish police while delivering an on-air report.

Watson was reporting from Istanbul on the anniversary of the Taksim Square protests when he was surrounded by plain-clothes policemen and detained.

Interestingly, Watson was commenting at length about Turkish police’s efforts to keep the crowd under control prior to his detention.

Watson later tweeted about the detention, saying that one of the officers “kneed me in the butt.”

Watson followed up by noting that the CNN team was released after half an hour, and that another officer apologized for the one that kneed him.

According to Watson, a “Turkish police officer wasn’t satisfied w/my press card from prime ministry. ‘Many are counterfeited,’ he said, demanding passport.”

Watch video of Watson’s detention below.