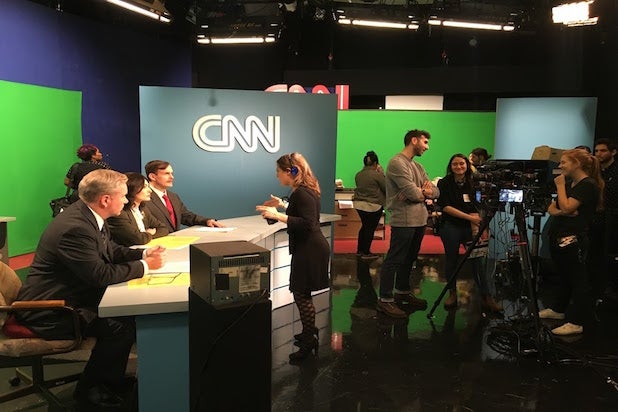 CNN recreated its Atlanta studio from 1986 to bring users back to the moment when the space shuttle Challenger exploded on live TV for a 360-degree video Virtual Reality reenactment in advance of  Thursday night’s premiere of “The Eighties.”

TheWrap was invited to attend an exclusive behind-the-scenes look at the project. We witnessed CNN’s team recreate everything from the cameras and phones in the background to the news desk, giving it a feel directly from the era.

The finished product features a quick explainer by Anderson Cooper followed by an intense trip back to Jan. 28, 1986. Every detail is covered, including hairstyles and outfits worn by the actors-playing-anchors. The 360-degree video allows viewers to not only check out the anchors’ reactions to the Challenger disaster, but also the chaos of the newsroom.

“One of the greatest strengths and powers of VR is it’s ability to give you presence in a new time and a new space,” CNN VR executive producer Jason Farkas told TheWrap. “We wanted to give people a chance to time travel back to three key moments in 1980s history.”

The decade offered numerous significant moments, but CNN settled on the tearing down of the Berlin Wall, the memorial set up where John Lennon was shot, and the Challenger explosion.

“For the Challenger explosion, we decided to actually include a bit of CNN’s history in it as well. Instead of recreating the moment where the disaster took place, we took note of the fact that CNN was the only national broadcast network to carry the explosion live on television,” Farkas said. “As tragic of a moment as it was, it was also a major turning point for CNN.”

A promotional team happened to be recording behind-the-scenes content inside the CNN studio the day the Challenger exploded and they kept rolling once the disaster took place. Farkas used this video to ensure his recreation was as authentic as possible.

The archival footage allowed CNN VR to pick up minor details, such as a staffer frantically running through the set as the news unfolded. CNN hired 40 extras, and designed 20 set pieces to give the feel that viewers are literally traveling back in time.

The dramatic scene that unfolds within the CNN newsroom while the anchors watch the Challenger explode on live TV is typically something you’d have to be there to understand. Not anymore.

“We also have a lot of CNN staffers who still work at the company, who weren’t on-air but were producers and behind-the-scenes people. We consulted them for historical accuracy,” Farkas said.

Everyone who watched the video seemed to have the same reaction, which is essentially: “Wow, this is insane.”

CNN used CGI effects for specific details, including what’s on monitors in the background of the studio. To make this happen, CNN partnered with TimeLooper, a location-based time-travel app for virtual reality.

“If you were looking at a TV monitor from the 1980s, what you will see is that actual TV monitor but in the green screen we will insert the footage,” TimeLooper COO Andrew Feinberg told TheWrap. “The detail is excruciating.”

The video will appear first on CNN’s Facebook page, CNN’s Android app — which as of this week integrates 360-video playback — and on the TimeLooper app. CNN has a team of 20 employees that a spokesperson says “touch VR,” so expect more projects in the near future.

The network was the first news organization to livestream a news event in virtual reality, with its VR coverage of a Democratic debate in October 2015.