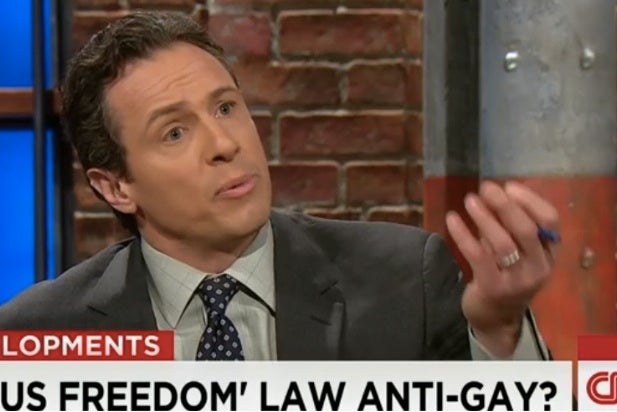 CNN’s Chris Cuomo has been at the forefront of covering the Indiana religious freedom bill that’s placed a large swath of the country—and media—up in arms.

In an interview Thursday with TheWrap, Cuomo said he sees similarities between the line religious business owners are using to refuse services to LGBT people and white people who wouldn’t serve African Americans decades ago.

“It starts to smack familiar of what was said by certain religious people about race,” he said. “It’s not that I don’t like blacks, it’s just that I believe they’re unequal, so I’m not going to serve them,” Cuomo continued, evoking the line black business owners used to use to refuse service to black people.

To Cuomo, supporters of the Indiana law saying that the issue isn’t them not liking the other side, but instead holding fast to their beliefs, is “somewhat of a meaningless distinction.”

“What we’re worried about is fairness under law, not who you like and don’t like,” he said.

Cuomo then pivoted to his explosive interview with Dr. Ben Carson in March—which set off a news cycle in itself— where Carson, a presumed GOP presidential candidate, drew a distinction between being black and being gay.

Being gay is a choice while being black isn’t, Carson said; an assertion Cuomo doesn’t buy into: “Well that’s problematic, why, because of how I feel about it? No, because of equal protection under the law under our national religion, which is known as the constitution.”

Cuomo says he had no interest in discussing Carson’s views of homosexuality: “I did want to talk to him about why he doesn’t think the standard applies equally to people of color and constitutionally to LGBT—he went down the choice road, not me.”

The Indiana law controversy will certainly remain in the bloodstream of the country and media for the near future, but Cuomo sees the underlying theme of a culture war as potentially playing a big role in the 2016 campaign.

These fallback cultural issues are more desirable for candidates than having to answer on what they’ll do about Iran or how they’ll create jobs.

“However, this issue is a little bit of a sticky wicket, because, especially on the right, you have a base that is playing to a narrow—some used to call it the Tea Party, now it seems to be the Christian aspect—you’re playing to a group of Christians that do not represent all Christians. Ok, yes, Christianity is the dominant religion, but you still have most of them being Catholics, and I guarantee you there is a range of what Christians believe on this issue that isn’t properly represented in what we’re seeing playing out in the country right now.”

The morning host says candidates will have to make a gut call on whether to play to the people who believe homosexuality is a sin or the larger swath of people.

“Success starts at the top—you’ve got somebody who has changed what and how CNN does it’s job, and I think he’s done it for better,” Cuomo said crediting CNN President Jeff Zucker.