After the Coachella stages went dark Saturday night, 944 Magazine and Armani Exchange lit up the private airport in nearby Thermal with a late-night neon carnival.

Camilla Belle, Abbie Cornish, Brittany Snow and Bryan Greenberg were among the 500 guests who rode full-size Ferris wheels and branded bumper cars, slid down a six-story slide, posed in A|X’s neon sunglasses at night and played authentic carnival games under the stars.

In honor of this week’s Earth Day, Brita gave out reusable bottles as prizes to the game winners, and thankfully provided endless water to many who needed it.

For the truly fearless, Ciroc and Jose Cuervo were free-flowing to those who dared to mix cocktails with 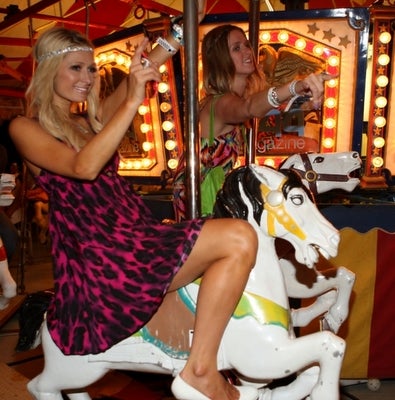 upside-down rides – such as the late-arriving Hilton sisters. (Photo, right, by Casey Rogers/AP)

Chris Masterson was more charity-minded, putting in time manning the Surfrider Foundation booth in an homage to Jesse Eisenberg’s character in “Adventureland.”

While fresh sponsors 944 and Armani Exchange launched a new concept with this elite late-night playground, the familiar location and returning hosts (Brent Bolthouse and partner Jennifer Rosero) drew attention to the absence of the late Adam Goldstein, better known as DJ A.M. Over the past few years, his performances had become synonymous with this party.

This year, 944 boss Marc Lotenberg brought in DJ Devin Lucien and Las Vegas showman Jeff Beacher for entertainment. He achieved a rarity at an industry event – actual, non-ironic, full-blooded dancing. Stacy Keibler and Hayden Panettiere hit the open-air dance floor that Lucien kept going till 4:30 a.m., with Jamie-Lynn Sigler among the last to pack it in.

During the weekend, there were performances everywhere. British rising stars One Eskimo put on an acoustic set for 98.7 FM at Hyatt Grand Champions Resort in Indian Wells on Saturday afternoon.

Other performers, like MGMT and Vampire Weekend, came by the night before to claim Vivitar’s Coachella-proof cameras. The waterproof digital and video cameras handed out to performers allowed them to document their Coachella experience and protect their memories from the infamous pool parties and spilled drinks. The results of my camera’s exposure to those same elements survived the weekend. (At left, One Eskimo performs and snaps and avoids the pitfalls of a pool like the one at the IndieOasis event.)

Long after Saturday night headliner Muse closed down the show, the music continued. Less than a mile away from the Empire Polo Fields, there were still more than 100 people trying to get into Night Vision Entertainment’s Oasis at the Merv Griffin Estate at 3:30 a.m. Sunday. Around 10 of Indio, Calif.’s finest officers of the law had assumed the position of “ultimate doorman” by that point – shutting down all further entrances.

Inside, Will.I.Am DJ’d the late-night bash inside a satellite of L.A. lounge Guy’s and Dolls.

NYC hotspot 1OAK also opened a satellite for the weekend at the Music Loves Fashion/House of Hype hotel takeover at the Riviera in Palm Springs. Lindsay Lohan and Kellan Lutz were among the 500-plus who arrived there early on Friday.

Before the hot weekend in the 909, other events popped up on both coasts last week.

Who says you can’t buy your way in to Hollywood? 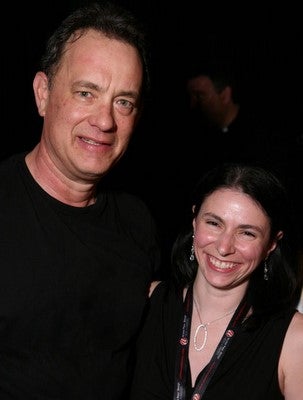 A New York school teacher won a co-starring role alongside Tom Hanks, Helen Hunt and Ewan McGregor in “Much Ado About Nothing” for this year’s “Simply Shakespeare” performance, an annual benefit for the non-profit Shakespeare Center Los Angeles.

The auction winning actor was Valerie Medina, a New York school teacher and big Hanks fan. (Photo at right by Ryan Miller/Capture Imaging) Medina’s sister bought the role for her with a winning bid of $23,100. Jackson Browne provided tunes for the fundraiser at the Broad Stage in Santa Monica last Monday night.

The entertainment industry as sport

Gatorade launched a campaign to equate the demands of the entertainment industry with professional sports in NYC last Tuesday. They recruited Sean “Diddy” Combs — a non-athlete — to attend the event for the new “G Series Pro,” a formula previously only available to pro athletes.

The entertainment mogul joined traditional endorsers like NFL stars Eli Manning (NY Giants) and LaDanian Tomlinson (NY Jets) in toasting (and even taking shots) of the formula at a Soho loft.

Diddy might have actually needed the electrolytes: he bypassed the elevator to run up eight flights of stairs to reach the event. This represents Gatorade’s continued push in to entertainment, after sponsoring recent finale festivities for Randy Jackson’s “America’s Best Dance Crew” on MTV.

Does this mean that the winners of the Miramax bidding will get a Gatorade bath?