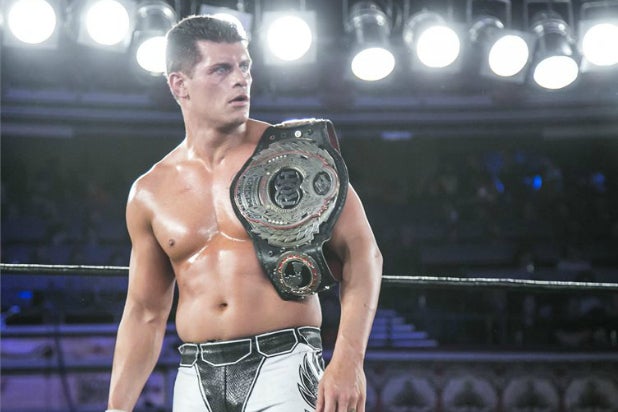 Cody Runnels is a professional wrestler who most of you would know as either “Cody Rhodes” or his former face-painted WWE character “Stardust.” These days, the son of Dusty Rhodes (real name Virgil Runnels, Jr.) and brother of Vince McMahon’s veteran grappler Goldust (Dustin Runnels) is just going by his first name in pro-wrestling promotions New Japan Pro Wrestling and Ring of Honor.

Oh, and he also happens to be World Champion of the latter, a title he’ll defend this weekend in Atlanta.

Why Runnels (pictured above from his WWE days) can’t use “Rhodes” is kind of complicated but mostly simple, as he told TheWrap a few days ahead of that defense. After leaving WWE, the world’s No. 1 sports-entertainment league took issue with some graphics Runnel had used to promote upcoming independent matches and appearances. At the first sign of pushback, Runnels cooperatively decided to not “rock the boat,” which is why he won’t go by “Cody Rhodes” on televised, pay-per-view or wrestling streaming events.

Also Read: WWE Star Dana Brooke Mourns the Death of Her Boyfriend Dallas McCarver: 'You Were My Life'

That said, he probably could, Runnels offered — and there’s a super easy workaround. We told you, it’s both complex and then also not at all.

“I could easily go by ‘Cody Rhodes’ in Ring of Honor or New Japan if I simply just texted Triple H and asked — no doubt he would give it to me,” Cody said, referring to McMahon’s son-in-law, a legendary pro wrestler in his own right and WWE’s executive vice president of Talent, Live Events and Creative. “The principal of it though is ,’Why the f— should I have to ask?’ I shouldn’t, and I don’t want to.”

Don’t blame Cody for the profanity, by the way — this reporter probably started it. I get fired up when talking about the squared-circle. Sue me — almost like what WWE did to Runnels. We’ll get to that in a bit.

Also Read: 'Stone Cold' Steve Austin Is 'Down With Anybody Using the Stunner'

But first, there’s more to unravel over this not-“Rhodes” thing. That’s because Cody’s wife — also a WWE alum who left within a few days of her hubby’s granted release — still goes by “Brandi Rhodes” over in Ring of Honor. She’s “smarter,” Runnels explained, and copyrighted the name.

We didn’t do that, as the couple just got some new wheels. Maybe in 100,000 miles TheWrap will take Cody up on that offer. Until that, at times, the real-life married couple can go by “Cody and Brandi Rhodes” when professionally together. Take that, WWE lawyers.

Either way, “I’ve come to like being Cody. I got all that time in my career getting the rub off of [dad] Dusty,” Runnels said. “I don’t want that rub anymore. New Japan enjoys [just ‘Cody’] because they only have to write one thing down. I dig it. I know I’m not Cher or Madonna, but the more merchandise I see with just my one name on it… I like just being ‘Cody.'”

But what does not-Rhodes sign when he is doing a meet-and-greet?

“My signature is so stupid looking that I write ‘Cody Rhodes,’ but you would think I just scribbled,” he replied. “When I sign for people today, I sign ‘Cody Rhodes’ and ‘Stardust,’ because kids don’t know. If they came into wrestling from Stardust on, I don’t want to be like, ‘Hey man, I’m Cody.'”

If going solely by “Cody” keeps the billionaire McMahon’s attorneys at bay, all the better. After all, Runnels hears from them enough, with much of the uglier correspondence revolving around a running “F— The Revival” (a WWE tag team) joke, which Cody said “is very much in jest and in fun.”

Someone didn’t tell WWE that part, and they sent him a cease-and-desist letter over the goof. There was more where that came from.

“I get about 5 to 10 emails a week from WWE, and… 50 percent [of them] are legal-type notices,” he told us. “And the other stuff [is] regarding my dad, and stuff like that. We have a unique relationship — it’s not a bad relationship, it’s just unique.”

Wrestler/actor Cody, who some of our readers may know from his arc on The CW’s “Arrow,” is set to defend his Ring of Honor World Championship Saturday Night at Atlanta’s Center Stage, when he’ll take on the winner of a 20-man honor rumble. Readers can catch more from our interview with the former WWE Superstar between now and his big ROH bout.

As to how to watch Cody’s title defense, again, this one is simultaneously easy and hard. Ring of Honor Wrestling is available in more than 500,000 Sinclair affiliate homes, plus NESN in New England, Cox Sports in the South, more 79 million homes via the Charge! TV Network. It can be streamed via the Fite app, and current and archived weekly shows are available online at ROHWrestling.com.

Netflix in September: What's Coming and What to Watch Before It's Gone (Photos)

Now that summer is winding down, kids are headed back to class and Halloween candy is already in grocery stores. We can’t wait to cozy up with everything pumpkin spice-flavored we can get our hands on and stream fall TV and new movies on Netflix. Here are our picks of must-watch shows for September.