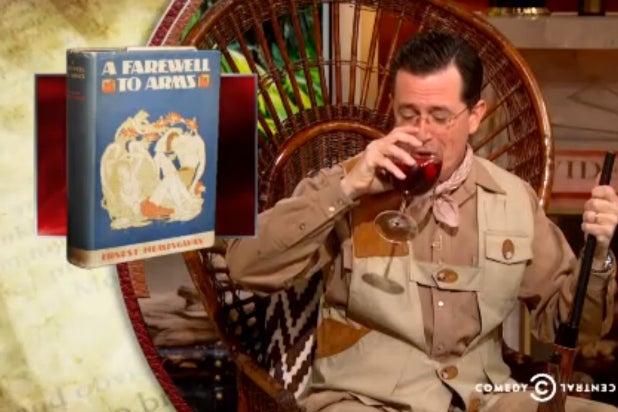 Stephen Colbert kicked off the third installment of his “cOlbert Book Club,” which he openly “started as a tribute to, and copyright infringement of” Oprah Winfrey.

This time around, the Comedy Central fireside topic was Ernest Hemingway’s classic novel, “A Farewell to Arms.”

The book “addresses the philosophical question: If you’re saying ‘farewell’ to your arms, what do you use to wave ‘goodbye?'” Colbert asked during Tuesday’s episode, while sipping on sangria and foreshadowing his vomiting to come.

To celebrate the literary man’s man, Colbert surrounded himself with dead animals: a wild boar, elephant tusks, and “an authentic leopard throw, from deepest, darkest Pottery Barn.” OK, so the Comedy Central host isn’t quite there.

But Hemingway was. As well-known as the man would become for his short, punchy sentences, he is also remembered as an avid hunter, trophy fisherman, and brave soldier.

Of course, it wasn’t always that way: “For the first six years of his life, Hemingway’s mother dressed him as a girl, even calling him ‘Ernestine,’ which in no way he spent the rest of his life compensating for,” Colbert quipped in Part 1 of his one-part series, “Better Know a Hemingway.”