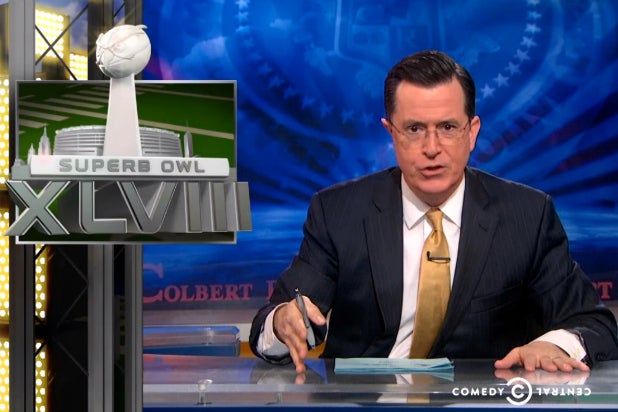 Stephen Colbert is ready for some football, but Comedy Central’s lawyers are not ready for the notoriously litigious National Football League.

Therefore, the “Colbert Report” will not be referring to the NFL Championship as “the Super Bowl” — a common practice among unlicensed commercials during this time of year.

So, bid adieu to the  planned “Stephen Colbert Official Super Bowl NFL Coverage Starring Stephen Colbert as Terry Bradshaw Sponsored by UnderArmour: Eat Fresh,” and welcome vague sentences like this one from the Comedy Central host: “We all know the winner of the ‘Big Game’ goes to Animated Mouse Theme Park.”

But wait, Colbert has found a loophole! By moving one consonant in the official name, the late-night comic can celebrate Super Bowl XLVIII and avoid (or at least minimize) cease-and-desist letters from the most powerful league in American sports.

So, “Colbert Report” fans, get ready for Superb Owl XLVIII, complete with a modified logo and a pretty kick-ass opening montage featuring the Abyssinian Long-eared Owl.

All week long, Colbert will be welcoming current and former NFL stars in anticipation of “Sunday’s Tight Pants Man Clash,” and the league’s lawyers will have no choice but to save their lawsuits for the local car dealerships.