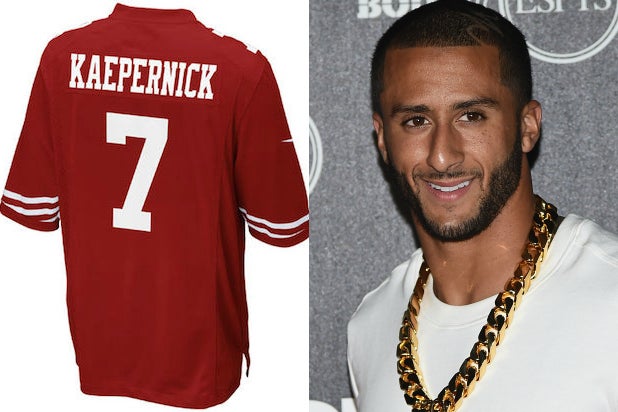 Colin Kaepernick has taken a stand by taking a seat, and the NFL Shop is reaping the rewards.

The San Francisco 49ers’ backup quarterback now officially has the top jersey sales in the whole league, per the company’s official merchandise website. Just two days ago, Kaepernick’s red No. 7 sweater was ranked fifth. Before all this National Anthem stuff, Kaep was actually ranked 20th on the 49ers’ individual site alone.

Some of the Kaepernick sales spike may not be coming from his fans, however — another contributing factor could be those voicing their opposition to the football player’s political statement by burning his jersey.

Since a preseason game against the Green Bay Packers on August 26, the quarterback has refused to stand during the national anthem as a way of protesting the country’s treatment of “black people and people of color.”

Kaepernick is currently under a six-year, $114 million contract with the 49ers.

The NFL player roused the ire of NFL executives and a whole lot of fans when he began protesting police brutality and racial injustice by remaining seated during “The Star-Spangled Banner” when it was played before games. He was also seen wearing socks depicting police officers as pigs during practice early last week.

On the flip side, Kaepernick has also drawn a fair amount of support from high-profile black leaders, including Spike Lee.

During the anthem on Thursday night, which was the 28th annual Salute to the Military at the Chargers’ Qualcomm Stadium, Kaepernick took a knee instead of sitting, though he was still subjected to boos from the crowd.