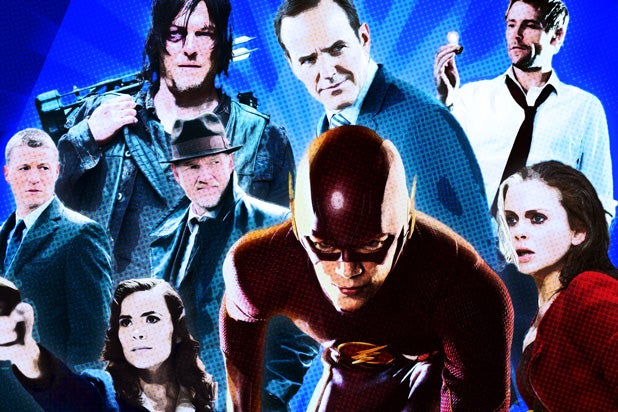 The fall 2014 television schedule looks like it would be more appropriate for a Comic-Con lineup. Fox’s Batman prequel “Gotham” debuted Monday night. The CW’s “The Flash” premieres on Oct. 7; “iZombie” opens midseason.

“Arrow” is returning for the youthful-skewing CW, while ABC’s “Marvel’s Agents of SHIELD” and its new spin-off “Agent Carter” are also due on the airwaves. NBC’s “Constantine” starts on Oct. 24.

Of course, those aren’t the only TV shows based on comic books. Ever hear of a little program called “The Walking Dead”? TV’s top scripted show is also based on graphic novels.

We’ve seen the box office get taken over by those in capes (and not in capes) in recent years, but this fall is clearly the high mark for those crusaders on the small screen. So why is that? Well, that depends on who you ask. TheWrap started with Ben McKenzie, star of the most-hyped of these new shows, Fox’s “Gotham.”

“I actually don’t know. I’ve asked myself that and asked other people that and I’ve never really gotten a good answer,” McKenzie told us. “Maybe the technology has caught up to production in terms of being able to make something that doesn’t feel incredibly lame and hokey trying to do a superhero show ever week.”

“There’s so much more that you can do,” he told us. “You can actually create these fantastic worlds and have them not look like cardboard sets.”

That’s definitely a practical reason, but Taylor also pointed to a larger emotional one.

“Due to the fact that we have constant news updates about everything that’s happening in the world and everything seems to be happening faster and faster — I think the escapism is welcome,” he said.

Taylor pointed out that it is no coincidence that many of these enduring heroes were created during World War II, a fact that was also independently offered by a third “Gotham” star, Donal Logue, when we asked him to explain the trend during a separate interview.

In that conversation, Logue presented another convincing reason: “Comic books are already storyboards,” he told TheWrap, referring to the physical setup on the page. That’s both a visual aid and a time saver, with plenty of storylines already booked.

Touting the old refrain “content is king,” Logue added: “There’s a treasure trove of really amazing characters and stories that have been compiled for decades. Some famous, some not.”

Plus, there’s this: “Film has become comic book franchises because it’s the only thing that can open a movie,” the actor concluded.

As anyone who studies the box office will tell you, he might have a point, albeit a slightly cynical one.

But what do actors know anyway? They just say what’s on the page in front of them, right?

TheWrap also spoke with Geoff Johns, who handles DC Comics adaptations such as CW’s “The Flash,” as well as Jeph Loeb, an executive producer on both ABC Marvel properties, “SHIELD” and “Carter.”

First up, Johns, who credited 2014 TV’s increased production value, comic books’ natural storyboard format and popularity of the blockbuster tentpole movies. OK, so maybe those actors knew what they spoke of.

Johns also said that the superhero genre isn’t the only one to historically make this leap from big (screen) to small. Johns used Westerns as an example of how an entire type of film successfully migrated to TV.

As for Loeb, he said that Marvel doesn’t even look at their shows at anything more than human stories. He and his colleagues don’t find their TV series to be much different than, say, “Law & Order.”

“When people look at ‘SHIELD,’ I’m not sure that people look at that as a comic book show,” Loeb said. “They look at it as a spy procedural show that spun out of the Marvel movies.

“When we talk about ‘Agent Carter,’ we refer to that as a wartime adventure show.”

Fair enough. But then he went even further, debunking the presumed genre of some of the biggest films of the last few years, as well as a big coming one.

“For Marvel, ‘Iron Man 3’ is not a comic book movie,” Loeb said. “It is a technological thriller. ‘Captain America: The Winter Soldier’ is a political thriller. The upcoming ‘Ant-Man’ movie is a heist movie. Those are the ways we begin all of our projects.”

Marvel simply saw an opportunity to feature characters that are very relatable in hyper-dramatic situations that also have a sense of humor, he explained.

“When you put all of those things together, you have a great television show,” Loeb said.

That said, there are admittedly practical reasons that the Marvel movies and the Disney company’s TV shows are very different.

“It has to do with the sheer amount of time — I don’t have a year to make a television series,” Loeb said.

But he wasn’t as interested in discussing those pragmatic motivations. Nor should we be focusing on them, according to the Marvel man.