If you’re headed to San Diego Comic-con 2019, you already know you’re in for a week of incredible costumes, huge panels, and (hopefully!) buying a lot of comics. But what if you couldn’t get a badge, are just on a budget, or need a break?

Luckily, there’ll be plenty to do all over San Diego during the 4-day nerdpocalypse — and we don’t just mean parties. During the day, studios will fill downtown with free events promoting fan-favorite shows and films, with plenty of activities, spectacles, and giveaways for badge holders and normies alike.

It can be hard to keep track of it all, but TheWrap has you covered. Read on for our handy guide to all the fun (and free) activations, from the chance to hang out in Shazam’s home town, a re-creation of “Brooklyn Nine-Nine,” a parading shark, to a huge Batman tribute, and even a chance to fly with the crew of the Roci from “The Expanse.”

We’ll be updating this post frequently, so check back often for the latest. And of course, TheWrap will be in San Diego for all of Comic-Con 2019. See our list of SDCC’s must-see panels, events and screenings here., and find out about the best and biggest parties here.

Also Read: What's Next For Marvel After 'Avengers: Endgame' and 'Spider-Man: Far From Home'? 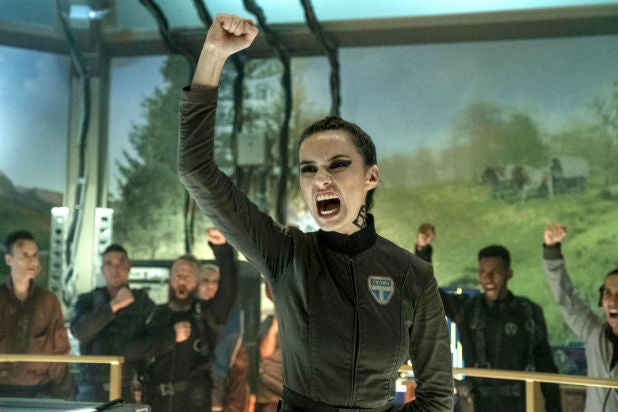 Amazon is treating fans to a huge immersive experience inspired by “The Boys,” “Carnival Row” and the upcoming fourth season of “The Expanse.” Located across from the San Diego Convention Center, the activation will feature a 40-foot tower covered in LED screens playing scenes from all three shows, plus some live, show-specific performances taking place onsite.

Attractions include a crime scene cover-up inspired by “The Boys,” a simulated humanitarian mission aboard the Rocinante from “The Expanse,” and exploring the “Carnival Row” Fantasy universe, including a neo-Victorian nightclub featuring a special performance. 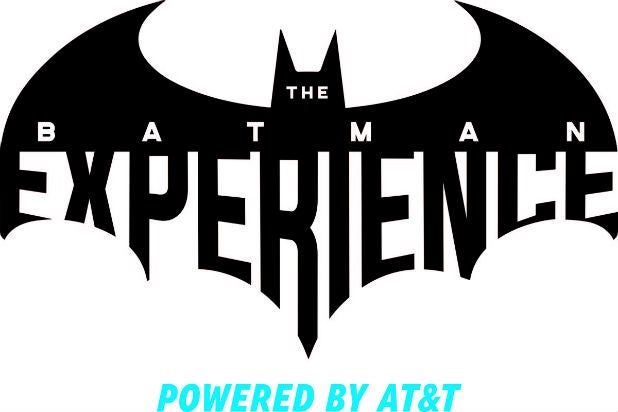 In celebration of the 80th anniversary of Batman (holy time files), DC and AT&T have teamed up for a massive, interactive exhibition that includes the largest-ever collection of Batman-related props, costumes and vehicles. The whole thing will be free and open to the public — no SDCC badge required.

Plus hundreds of rare pieces of DC comic book art and film and television props, including several from Tim Burton’s “Batman,” which celebrates its 30th anniversary this year, along with other surprises.

Inside, attendees receive collectible gold and silver coins they can use to further explore the grounds. There’s also a Cosplay Photography Corner, where a lifestyle photographer will take professional portraits for digital takeaways. 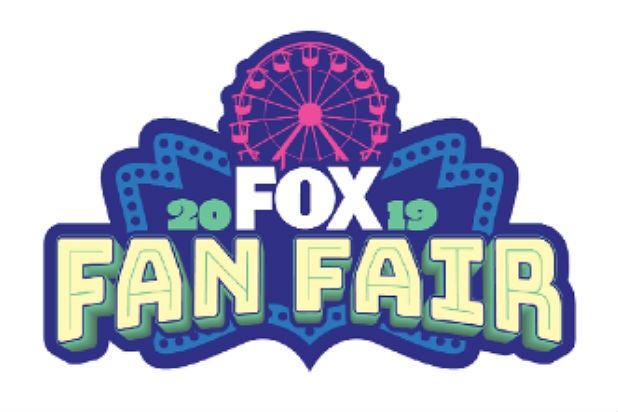 Fox is going all-out at Comic-Con with this literal pop up amusement park inspired by its Sunday night “Animation Domination” programming block. Centered by a 70-foot-tall Ferris wheel (no really), the fair features rides, carnival games and augmented reality content promoting “The Simpsons,” “Family Guy,” “Bob’s Burgers,” and the upcoming “Bless the Harts.” There’ll also be food and prize giveaways for attendees, plus appearances by cast and producers from each of the shows (follow Fox on Twitter to find out when). It’s free, and open to the public.

(And yes, we get the Fox Fan Fair/Fox fanfare pun, just in case anyone’s watching.) 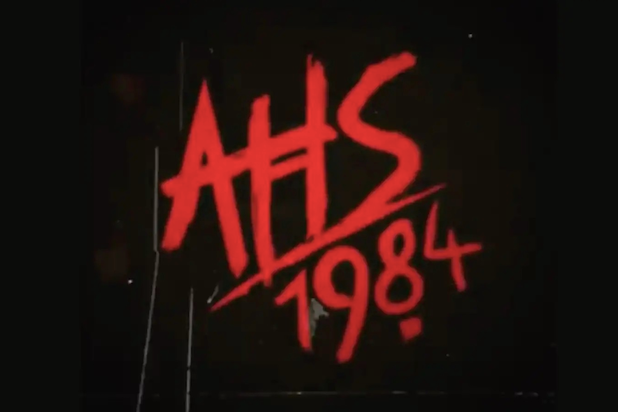 Anchored by the “American Horror Story: 1984” – Face the Darkness activation, FX Fearless Forum will also feature the “What We Do in the Shadows” Lair, “It’s Always Sunny in Philadelphia” Sunscreen Zone, and the “Archer” O2 Station. There’s also a nightly light show. Produced by FX Design in collaboration with BARTKRESA studio.

Fans can pre-register for a RFID badge, required to gain entry, on FXSDCC.com both in advance and on-site. Registration & badge collection is required to check into and participate in giveaways and other activities. 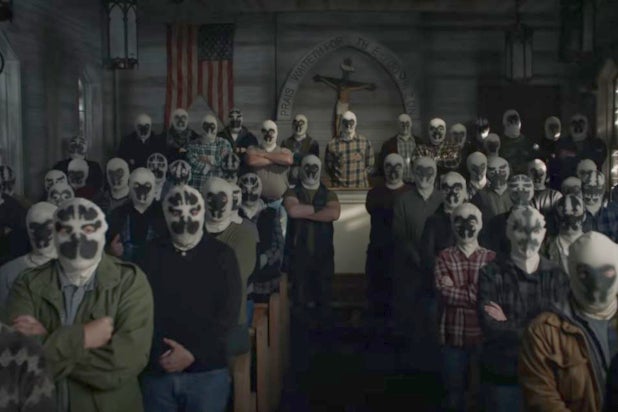 The Gaslamp Quarter will be site of what HBO is calling “a surprise in-world opportunity to engage with” the upcoming comic adaptation. We don’t know what that means either, but we’ll all find out in two weeks.

Another one-day-only event, Nat Geo is marching a 20-foot long replica of Deep Blue, the largest great white shark ever filmed, through downtown San Diego on a route touching on some of the Gaslamp Quarter’s most well known attractions. It starts at 10:30 a.m. Saturday and will continue throughout the day, ending as Nat Geo’s annual Nerd Nite party kicks off at 8:00 p.m. The activation promotes Nat Geo Wild’s upcoming simulcast special “World’s Biggest Great White?”, which premieres July 21.

FYI, the shark’s route will be bordered by Market Street along the west/north, Harbor drive to the south, and by 7th along the east. Nat Geo will be releasing a more exact route later in the week. 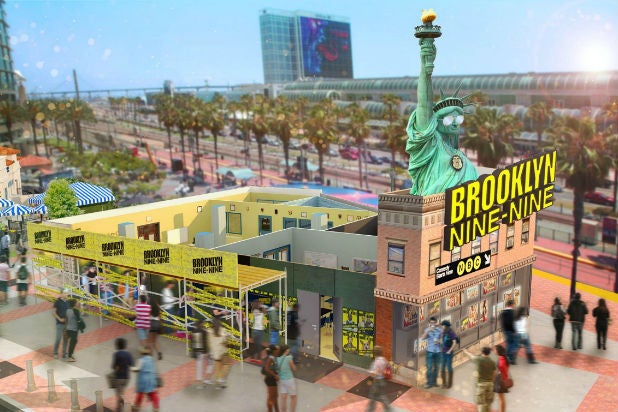 Visit a recreation of the 99th precinct for fun activities, exclusive content, giveaways, and photo opportunities. Nine-Nine! But bring water, because shade is pretty nonexistent at this corner of the Gaslamp.

The pop up for NBC’s “Superstore” offers exclusive content, a custom photo opportunity and a “customer service” desk to host exclusive “Superstore” giveaways. See the show’s official Twitter (@NBCSuperstore) for more during Comic-Con.

See the Hard Rock’s Maryjane’s Diner transformed into the Interdimensional Hole of Pancakes from Season 3 of “The Good Place.” See the show’s official Twitter (@nbcthegoodplace) for more during SDCC. 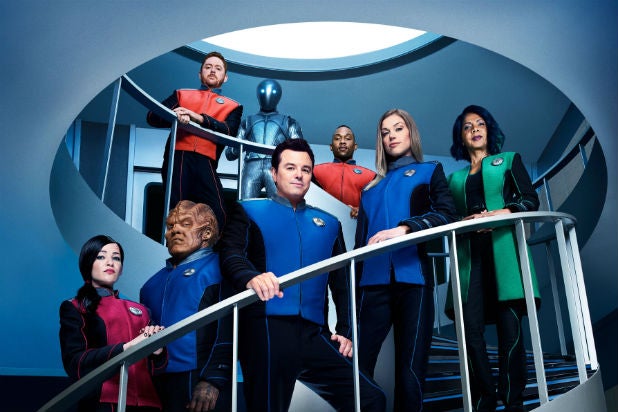 Fans of the excellent Fox sci-fi series can get a closer look at the show’s world with this event showcasing costumes, creatures, props and art directly from the set. Highlights include costumes worn by guest stars Charlize Theron (Pria) and Rob Lowe (Darulio), some of the show’s creatures, and the mustache Bortus had for an episode. During the week, members of the show’s cast and creative team will also be making surprise appearances. 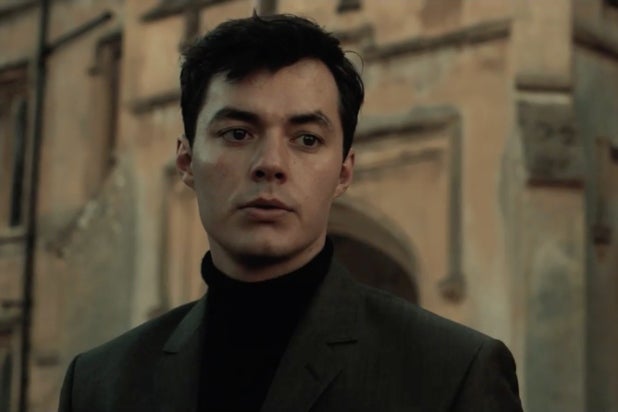 Just a few blocks north of the convention center is this activation based on “Pennyworth,” the upcoming Epix series about the younger years of Batman’s butler. The event takes fans to a recreation of 1960s London, where they’ll figure out a secret password to gain entry to a seedy high society club, play black jack, take photos and enjoy live entertainment, and experience a mock up of the secret headquarters for the show’s shadowy Raven Society. Plus other “Pennyworth”-related scenes.

Set up to promote “A Trick of Light,” the posthumously-published new superhero novel Lee co-wrote with Kat Rosenfield, this activation produced by Audible promises “reality-bending light and sound-driven experiences” inspired by key moments from the book, along with an introduction written and narrated by Stan the Man himself.

And for those of you with badges, Audible will also be hosting a panel at Comic-Con on July 20 at 6:30 p.m. in room 7AB. 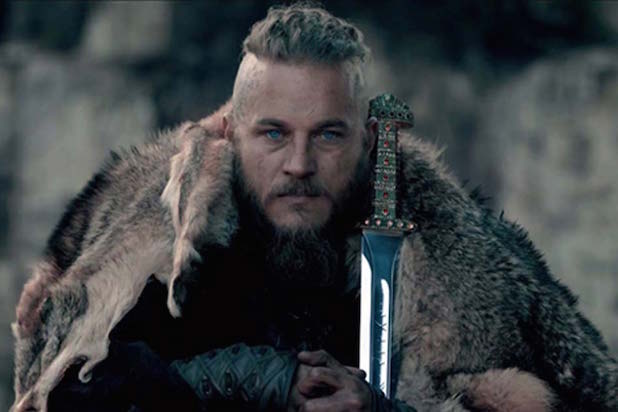 This one-day-only event gives fans of History channel’s “Vikings” the chance to test out a career in Viking-ness by learning the techniques required to throw a battle axe. Fun! There’ll also be a “Vikings” trivia game and the opportunity to get some temp tattoos. Vikings stars Katheryn Winnick and Alexander Ludwig will also make appearances: Ludwig from 2:00 to 3:30 p.m. and Winnick from 3:30 to 5:00 p.m. And PS: this one’s open to the public too.

WB might not be holding a big Hall H panel this year, but the studio is representing for two of its recent hits — “Pokémon Detective Pikachu” and the thoroughly wonderful “Shazam” — with this two-for-one activation just outside the Omni Hotel, right across the street from the convention center.

First, there’s a recreation of Ryme City from “Pikachu,” featuring the city’s neon landscape, film prop displays, and an infinity room, plus prize giveaways and the chance to take a photo with Pikachu himself.

Second, stop by a recreation of the Chilladelphia Winter Carnival from “Shazam!” and enjoy fun photo ops and play carnival games like a ring toss, bean bag toss, high striker and more for the chance to win prizes.