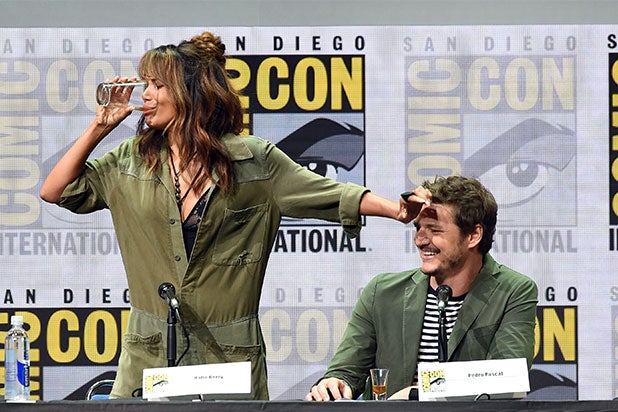 In what will go down as one of the most bad a– moves to grace a Comic-Con stage, Halle Berry chugged close to a full glass of bourbon during the “Kingsman: The Golden Circle” panel on Thursday.

The cast of the upcoming sequel to “Kingsman: The Secret Service” were discussing what the shtick of the Statesman — Kingsman’s American counterpart — was. For example, the Kingsman are all tailors, but the Statesman make a bourbon called Statesman Reserve.

He then pulled out a bottle of Old Forester Statesman, which is named Statesman Reserve in the film, and started passing the bottle, shot glasses and a single pint glass down the table. Berry ended up with the pint glass and Tatum, who was sitting next to her, poured the glass about three quarters full.

When it came time for the audience Q&A, a fan asked Berry whether she thought “Kingsman” or “Die Another Day” (the James Bond film she starred in) was more British. Berry replied, “I’ll pass,” at which point Tatum said, “can she drink instead?”

Ross then started to chant “chug,” to which Berry said, “Oh I can, now. Would you like to see that?” The audience then cheered and a few seconds after mustering up, the Oscar winner chugged the glass.

Bridges was the only other person to drink the whiskey. Berry plays an agent named Ginger Ale on Team Statesman in the film.

See videos of Berry below.

Someone please check on Halle Berry​ after chuggin' this pint of whiskey at the 'Kingsman 2' #SDCC17 panel. pic.twitter.com/w8NmkYh4lD