Favreau: Fans Have Been Punished by Studios

The director and his stars open up on "Iron Man 2"

In which Robert Downey Jr.’s one-liners — and an absent Mickey Rourke — steal the show.

Sony rolls out "Zombieland" and Roland Emmerich’s big-budget film of the apocalypse, "2012."

Plus, a preview of his upcoming Fox toon, "The Cleveland Show."

Worry about "depression," announce plans for 3D versions of "Titanic," "Lord of the Rings."

First ‘The Hobbit,’ Then ‘District 9’

Peter Jackson addresses the elephant in the room, then previews his new low-budget, alien-filled producing project.

In "Legion," bees, explosions and winged evil angels that come as part of the apocalypse.

An Oscar-Nominated Short Gets Big

A Slew of Disney Re-Do’s in 3D

"Beauty and the Beast," "Toy Story" are on tap; plus, the presentation includes clips from the new "Princess and the Frog," "Ponyo."

At Diablo Cody’s "Jennifer’s Body," the actress was "having fun with it … making fun of my own image, and who some people might perceive Megan Fox to be."

Of Gilliam, Ledger and, at Last, Don Quixote

Gilliam’s "The Imaginarium of Dr. Parnassus" got its first stateside preview to an audience eager to catch a glimpse of Heath Ledger’s final performance.

The director announced a massive marketing ploy, along with a 24-minute preview of his highly anticipated, and secretive, film.

After camping outside all night to catch a glimpse of Edward and Bella in person, the rabid crowd shrieked as the stars took the stage for a panel discussion and a pair of clips. 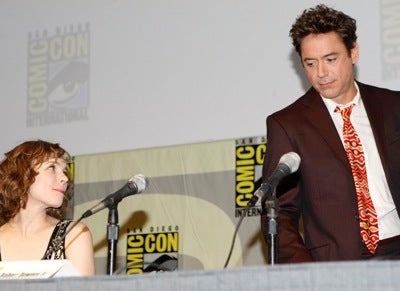 On Friday, Warner Bros. kicked things off with a panel for its upcoming films. On display: the Josh Brolin-Megan Fox adaptation of "Jonah Hex," "Where The Wild Things Are," "The Book of Eli," "A Nightmare on Elm Street" and "The Box." Robert Downey Jr. took the stage, along with co-star Rachel McAdams, for the "Sherlock Holmes" presentation and talked about the challenges as an actor…and of this role specifically. "I don’t think anything can be too challenging," he said. "I have an illness of too much confidence. The challenging thing was the controlled chaos of the set."