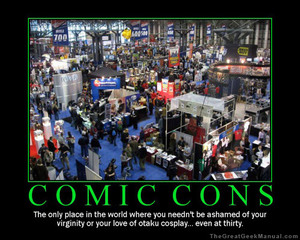 A random conversation among four 14-year-old boys about the center of their lives: "The Dark Knight," and Comic-Con, the five-day geek-a-rama in San Diego that kicked off today. This event, now sold out, has become one of Hollywood’s biggest promotional moments of the year. No studio misses out. Neither does any self-respecting teen.

Jeremy: "The Dark Knight" is the greatest movie of all time.

Burt: "No. The Avengers will be the greatest movie of all time. Marvel’s making it."

Casey: "That won’t be out for like three more years. And Comic-Con is now. And it’s going to be the greatest thing ever. When are you going?"

Burt: "Tomorrow. I’m staying for the entire time. You?"

Casey: "My dad is taking me for two days."

Burt: "I have a friend who bought an original Spiderman comic book for like $8,500, and then he got Stan Lee to sign it!"

Anyway, I’m heading down south tomorrow to check it out, and will bring you tidbits and the latest. My geek antenna are admittedly imperfect, but I intend to keep an eye peeled for info on the much-anticipated "Watchmen," the Benicio del Toro vehicle "Wolfman," and Frank Miller’s first directing effort, "The Spirit." Tomorrow’s agenda, however, features my friend Catherine Hardwicke and her new film, "Twilight."