New York Times TV critic Alessandra Stanley is coming under attack from filmmaker Barry Levinson, who took the highly unusual — though not unheard of — step of criticizing the critic.

Stanley, whose high correction rate has attracted the critical eye of media watchdogs as diverse as Gawker and Columbia Journalism Review, is now being slammed for misrepresenting Levinson’s "Poliwood." A documentary that explores the connections between celebrities and Washington, "Poliwood" premiered at the 2009 Tribeca Film Festival and last week made its TV debut on Showtime.

Levinson’s problem with Stanley’s review? He claims the critic misrepresents the entire point of his film in order to make a larger point about politics and campaigning.

"This is what Ms. Stanley does," writes Levinson. "She alters reality to fit her thesis."

"Ms. Stanley can be as critical as she wants of Poliwood, but I find it very disconcerting to be criticized for what wasn’t presented so she can fuel her own false premises," Levinson says in a commentary first published earlier today by the Huffington Post. 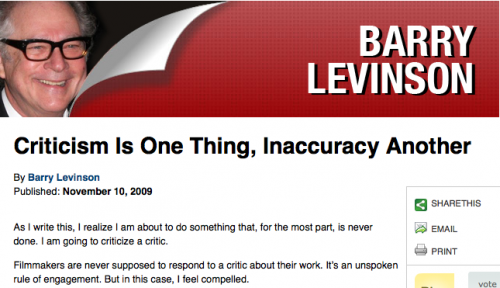