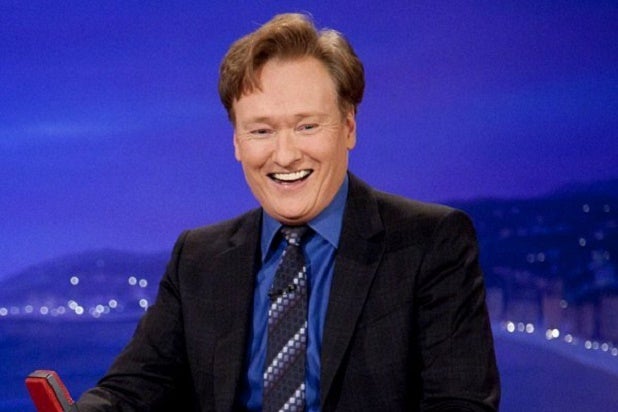 Conan O’Brien blasted one of his show writers Sunday for sending a series of sharp and nasty messages on what he saw as the dismal state of late night television.

“I wish one of my writers would focus on making my show funnier instead of tweeting stupid things about the state of late night comedy,” the TBS show host  tweeted.

O’Brien was referring to Andres du Bouchet, a writer for the famously red-haired comedian’s show, who took to Twitter on Thursday with a barrage of scathing messages.

I wish one of my writers would focus on making my show funnier instead of tweeting stupid things about the state of late night comedy.

“Comedy in 2015 needs a severe motherf—ing shakeup. No celebrities, no parodies, no pranks, no mash-ups or hashtag wars,” he wrote. “And shove your lip-syncing up your ass.”

“Prom King Comedy,” du Bouchet said in another. “That’s what I call all this shit. You’ve let the popular kids appropriate the very art form that helped you deal. F—.”

Also Read: Why Trevor Noah’s ‘Daily Show’ Hiring Is Big Step for Late-Night TV — Despite His Tweets and Gender

While not naming any of the rival late night shows, Du Bouchet’s messages didn’t leave much doubt as to the targets. The “Tonight Show With Jimmy Fallon” regularly features lip-sync segments, and “Jimmy Kimmel Live!” is known for its pranks, and celebrity send-ups are common.

Du Bouchet may have seen the error of his ways even before his boss weighed in. On Friday, he tweeted that he was a “bonehead” and said, “Now comes the inevitable dressing down at work for criticizing other talk shows!”

It took a couple of days, but Coco delivered.

Here’s the original tweets from the du Bouchet tirade courtesy of Uproxx: 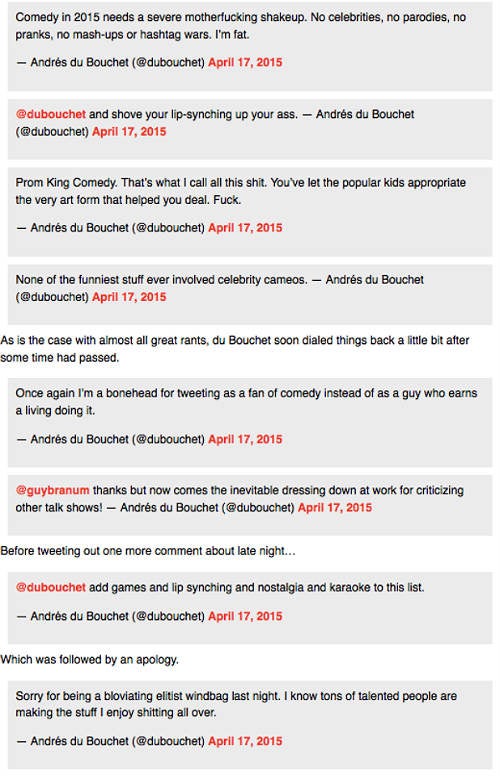