Harry Langdon was a baby-faced comic star whose on-screen persona was that of a guileless man-child. He was, briefly, wildly successful in the 1920s, thanks to several movies directed by Frank Capra, who showcased Langdon’s cherubic simpleton to best advantage.

Following a plotline all too familiar even today, Langdon began to believe his publicity. He parted ways with Capra, turned auteur and began directing his own movies.
The result: a succession of turkeys and a quick slide into obscurity. 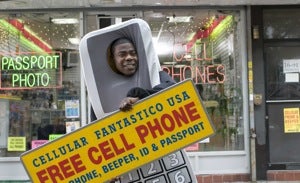 The venerable critic Walter Kerr ranked Langdon alongside legends Charlie Chaplin, Buster Keaton and Harold Lloyd in “The Silent Clowns,” his 1975 book appraising early screen funnymen. But Kerr never received much support on his Langdon call.
(If you want to decide for yourself whether Langdon is under-rated, check out “Lost and Found: The Harry Langdon Collection,” a four-disc collection put out in 2007 by Facets Video. It includes 20 of Langdon’s movies.)
For my part, I would argue that Langdon was enormously influential. Squalling boys encased in men’s bodies remain a hugely popular comic archetype on screen — and I’m not talking about Tom Hanks in “Big.”
Adam Sandler, Will Ferrell, Jack Black and Andy Samberg all have built careers — we’ll see how lasting — on not acting their age. Most recently, Zach Galifianakis stole his scenes in “The Hangover,” waddling through last summer’s comedy hit as a human version of a perverse Baby Huey.
These guys are avatars for the perpetual boyhood fantasies of their mostly male fans. They behave like slow-witted spoiled children, living in worlds totally centered around their wants and needs and have few real responsibilities. Yet they manage to save the day and wind up with a busty hottie by movie’s end. They’re Peter Pan with a sex life.
(Their female doppelgangers are the ladies of “Sex and the City,” who do little besides shop and brunch — and get horizontal.)
Of course, it should be noted that in the real world, proudly juvenile behavior is hardly limited just to stunted slackers. Even big, important adults, ones with big important jobs, act as if they were barely out of training pants.
Wall Street warriors thump their chests while collecting obscene bonuses, while politicians refuse to get done what needs to be done, preferring instead to call each other nasty names and stamp their feet.
But in real life, such me-me-me behavior is castigated. In the movies, well, everyone just acts as if it’s normal. It’s as if everyone is living on Planet Stupid in some parallel universe.
Which brings me to Tracy Morgan, who takes up residence in that solar system in “Cop Out.”
He and Bruce Willis play a pair of Brooklyn police detectives hunting down the leader of a Mexican drug gang in this inept and unfunny buddy action-comedy. It was directed by Kevin Smith, who brings nada to the party.
Morgan plays a doltish immature clown opposite Willis’ hard-boiled veteran. (Willis could play this role in his sleep — and does appear suspiciously close nodding off a couple of times.)
Morgan’s cut-up cop yells, blubbers and belabors the obvious ad nauseam. After yet another of his inane outbursts, an irritated Willis finally expresses the sentiment of many of us when he demands of Morgan, “What are you, a 5-year old?”
Morgan can be a funny guy. Just watch any episode of “30 Rock.” But in that show, his unrestrained id is part and parcel of his playing a show business monster to whom everyone caters. Morgan’s Tracy Jordan doesn’t have to act like an adult, so long as he can play one on TV when the red light goes on. Also, he’s a supporting character, not the lead.
In "Cop Out," Morgan is partly carrying the movie. His New York City cop is supposedly accomplished enough to have been promoted to detective. I know this is a comedy, but as a New Yorker, I take offense at the notion that this bumbling nitwit would ever be out keeping my streets safe.
Actually, I take offense at all these nitwits. Comedy should come from a real place, not the kindergarden playground.
x
Looks like you're enjoying reading