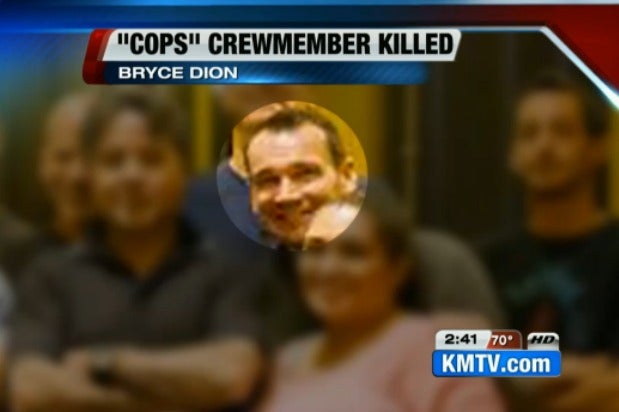 Omaha’s chief of police says the “Cops” soundman killed while covering a robbery was shot by friendly fire from police, who were facing off with a suspect who turned out to be wielding a pellet gun.

Chief Todd Schmaderer said his department was mourning Bryce Dion “as if we’ve lost one of our own.” He said Dion was wearing a bulletproof vest, but was shot in an exposed area. He was killed Tuesday night in a shootout at a Wendy’s restaurant.

“It was an officer’s round that struck Mr. Dion,” Schmaderer said at a news conference Wednesday.

Cortez Washington, 32, the suspect in the robbery, was also shot and killed.

Schmaderer said officers had no choice but to fire on Washington because he shot his weapon at them.

“While it looked and sounded and slid like it was real, it was a pellet gun,” he said.

Dion, who was working with a cameraman, was shot while caught in a vestibule. The cameraman was able to hide under a table.

Morgan Langley, one of the heads of Langley Productions, which produces the show, said Dion had been with “Cops ” for seven years and was recently promoted. He said Dion, originally from near Boston, was passionate and hard-working. He said he had hired him.

“Cops” creator John Langley said every city suffers from crime, and that the killing should not reflect badly on Omaha.

“We are deeply saddened and shocked by this tragedy and our main concern is helping his family in any way we can,” Langley Productions said in a statement. “Bryce Dion was a long-term member of the ‘Cops’ team and a very talented and dedicated person. We mourn his passing. An investigation is ongoing and we are cooperating with local authorities.”

All are on paid administrative leave. Under state law, a grand jury will be convened to investigate their actions.

Asked at the news conference if his officers were “showing off for the cameras” at the time of the shooting, the chief said such suggestions were “ridiculous.” He said the officers were in the middle of a chaotic, dangerous situation.

Schmaderer said he would not have allowed “Cops” to film with his department if he could have anticipated the tragedy.

“Personally I will live with this forever,” he said.