Maggie Gyllenhaal appeared in a mix of quirky, cult favorites including “Donnie Darko” and “Cecil B. Demented” before bursting out in “The Dark Knight.” Daughter of director Stephen Gyllenhaal and screenwriter Naomi Foner, big sister to actor Jake and wife of actor Peter Sarsgaard, Gyllenhaal stars opposite another acting family beacon, Jeff Bridges, in Fox Searchlight’s “Crazy Heart,” opening Wednesday.

Just growing up in Los Angeles with parents who made movies, I had access to all sorts of things that a lot of people don’t have access to. 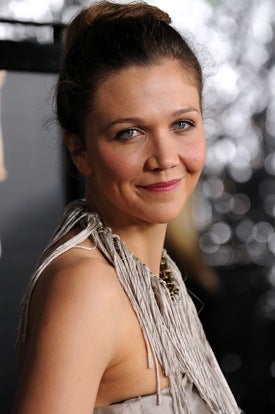 My parents weren’t like movie stars. My parents made good little movies, and it felt more like their friends were artists than celebrities. But at the same time, everyone had agents and I knew their agents. It’s different than like my husband, who came from Washington University and moved to New York and didn’t have a connection anywhere.

As a kid, I did sort of walk across the screen in some of my dad’s movies, but I wouldn’t say that was how I really got started as an actress. It was more to go and visit him on location than for me to actually express anything.
My last semester in college at Columbia, I’d been auditioning a little bit, and then I got a job in a tiny, tiny, tiny little independent movie, like half a million dollars was the budget. And then there were a couple of other little parts in independent movies; then I started getting little tiny parts in bigger movies like “40 Days and 40 Nights” and “Riding in Cars With Boys.”
I was kind of just a jobbing actor, taking what I could get and doing my best with it.
I was living in New York, and I read the script for “Secretary.” I do really have this thing where I just know when I read a script, that’s something I need to play. And I had that feeling. I thought, I don’t know why I need to do this, I don’t have any idea how I’ll do it, but I know that I can do it and that I want to.
I had been auditioning enough that I had some relationships with casting directors. The woman who cast me in this, Ellen Parks, had cast me in another tiny little independent movie and was always kind of bringing me in.
So I went in and auditioned, and I had like three or four scenes to read — hard, long scenes.
“Secretary” was beautifully written, you know, with lots of twists and turns. And I read for director Steven Shainberg, and he said to me, “OK, I’ve got like 10 notes. Don’t by any means feel like you have to hit all of them, but I’ll just tell you what they are.”
I so completely understood him. That’s not always the case. I’ve gone and met and talked to fantastic directors, and sometimes we don’t understand each other in the same way. This was … I completely understood him, and I remember I went and took all his notes.
Then I went in and read for him again, and then he went and offered it to like 10 other people — you know, to try to get his money. There were so many other actors, and I just kind of had to wait until they all turned it down, and then he came back and offered it to me, finally — which by the way never ever would have happened in the financial climate of today. You never ever could have made a movie with an unknown actress and James Spader.
In a way, “Secretary” was where I actually really got to stretch out and express something of myself. It changed absolutely everything for me.
It didn’t get bought right away. Then, at Sundance they showed it, and I felt a heated response to it. I think we won an award, Most Original Movie or something like that. And then it got bought. We traveled around with it. We went to Deauville and we went to Toronto, and it opened right after that.
I wanted to explain to people that I had made the movie consciously, that I wasn’t actually a little innocent girl who felt like Eliza Doolittle. I was like, I know about gender studies and sexual politics — I really wanted to tell everyone that, but in fact I was so naïve and I knew very little.
And then the movie came out. I didn’t have any way of preparing for it. I started to get a little scared of the attention. It was overwhelming.
Now I’ve been through that a couple of times, and I have a more objective view. I see that it’s not validation — it’s a little bit that, but it’s a lot of other things, as well. But I didn’t know that then, and I didn’t know when or how it would stop or if it would stop. I just kind of went where they told me to go.
And I was so glad that it was all happening with a movie that I really felt proud of and thought was really about something.
x
Looks like you're enjoying reading